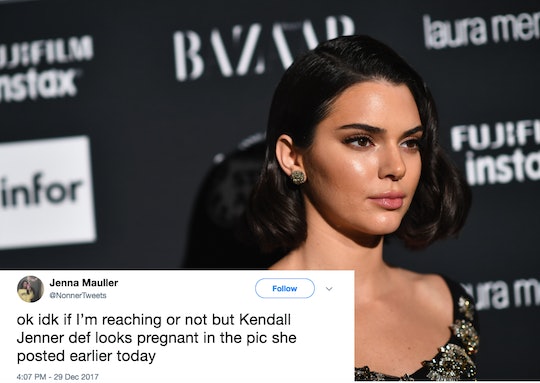 Kendall Jenner Pregnancy Rumors Are Circulating For All The Wrong Reasons

As if we all weren't totally inundated with Kardashian and Jenner pregnancy news, now people are spreading Kendall Jenner pregnancy rumors. While I'm never one to turn down some KarJenner news (especially when it comes to adorable babies), these rumors are all based on one selfie the supermodel took in which her stomach is on full display, which is just wrong on so many levels.

The selfie is taken in a form fitting dress and people are leaving comments all over social media that they think they can see a "bump" in the picture, all because our doll Kendall has, well, a stomach. There are so many things wrong with this assumption, namely that a woman's body has angles and curves — yes, even models — and just because she's showing them off doesn't necessarily mean she has a child visibly growing inside of her.

It's no wonder that the Kardashian and Jenner family is so obsessed with fitness and how they look. The sisters get trolled for literally every way their body looks. Fans were speculating that Kylie was pregnant (since she won't confirm the rumors!) simply because her face looked "fat" in a Kylie Cosmetics video a few weeks ago.

And it was just two years ago that news outlets were running headlines like, "Feed The Model!" and using the word "skeletal" to describe Kendall's body on the runway. Now, the fact that the lighting in the bathroom shows the contours of her stomach, which is a totally normal thing that happens with human bodies, it means she's pregnant? Ugh, the KarJenner body trashing never ends.

It seems like so many people feel they have the right to pick these women apart simply because they're on TV and all over our social media feeds. It's a vicious circle, since you'll hear people complain that the Kardashian and Jenner fame is all based on appearance and that their bodies, which are deemed "perfect" and something all women should aspire to sometimes, hurts women's body image.

But people criticize the sisters in a way that can be damaging to them, too. Yea, they're huge stars and their literal job is to be on the cover of magazines, but that doesn't mean they aren't human beings. It's really gross watching people just assume they can essentially bully them every time one of them posts a picture.

Kendall has famously been really open about her often crippling anxiety on Keeping Up With The Kardashians and told the Daily Mail that the fact that millions of people are watching her at all times "freaks her out." Especially when it comes to her body image, she said in an interview with Harper's Bazaar Arabia in 2013:

It's a shame that being called "fat" or "skinny" or whatever adjective is an insult for anyone. Why are we still making assumptions about people — that they're pregnant, lazy, vain, sick — based on their weight? You'll notice that in most of the comments, people know they're "reaching" or that it's "none of their business." Yet they offer up the veiled insult anyway.

People Are *Obsessed* With Kendall's "Bump"

On some level, of course, it's understandable that people are just throwing the word "pregnant" around on anything the Kardashians or Jenners post. Since rumors broke in late September that Khloé and Kylie were reportedly expecting, people have been on "bump watch."

If you need to speculate that Kendall is pregnant, at least do it correctly. There's always the theory that Kim's November comment to James Corden about the Christmas card only including "women and children" actually means mothers and children...which is why Kylie was excluded and Kendall was in it. Did your head just explode?

I'm just saying — there are ways to obsessively wonder about the state of Kendall's uterus that doesn't include body or bump shaming, though the world would likely be better off if we'd just let them their lives. But where's the fun in that?