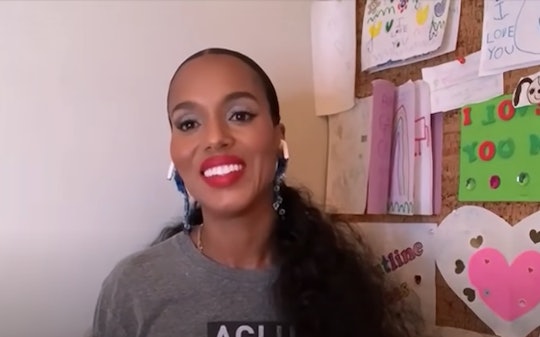 Her days as Olivia Pope might be over, but when Kerry Washington explained politics to her kids, it seemed like her imaginary days in Washington D.C. gave her some pretty solid insight into dealing with stressful elections. And let's face it; few elections have been more stressful than the 2020 presidential race, so Washington had her work cut out for her when she tried to explain it all to her kids.

Washington is mom to two children, 7-year-old daughter Isabelle and 4-year-old son Caleb, as well as being stepmom to husband Nmandi Asomugha's 14-year-old daughter from a previous relationship. In the past, she's been reticent about discussing her personal life during interviews, but when she sat down to chat with Jimmy Kimmel on Jimmy Kimmel Live! she opened up about the election and how she's been trying to explain things to her kids. As she told the talk show host, "We do talk a lot about it, we talk a lot about the election in my house," referring to the 2020 presidential election race between President Donald Trump and former Vice President Joe Biden. It's a tough conversation many parents are probably having, especially since the election is still not over.

The Little Fires Everywhere star went on to explain that, since her kids are pretty little, she tries "to talk about it in ways that are not scary."

How does she avoid scaring her kids? By using a great superhero analogy that could work for lots of confused kids right now.

Washington's kids might be pretty young, but she has been trying to educate them on how the world works for quite some time. Educating all kids, in fact. Back in June, she spoke to Kimmel about explaining Black history to kids in a different way: "Kids are introduced to race at Black History Month or in the concept of change makers like Martin Luther King Jr. or Rosa Parks and I think it's really important that we start to introduce the idea of race with a Black history that begins before teaching kids about what Black people were told they couldn't do."

Kerry Washington's election analogy of superheroes and bad guys is an ingenious way to explain what's going on in the world to little kids these days. Also maybe a few adults.