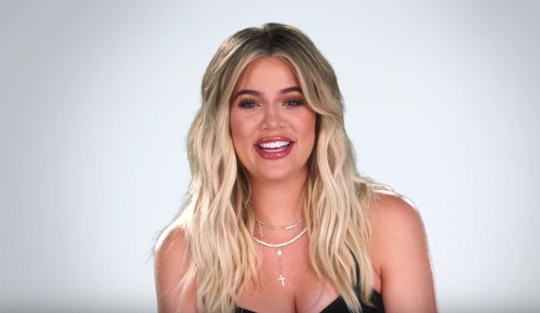 Have you marked your calendars yet? Khloé Kardashian is due to give birth sometime within the next few weeks, which means that fans are going into overdrive trying to figure out what she's going to name her baby girl before she even goes into labor. To make things simpler for the internet, at least, Khloé Kardashian addressed this one baby name theory so fans know not to worry or think about it too much.

To be honest, I was a little wary of this theory when I saw it pop on social media months ago. Khloé has been posting pictures of flowers, a lot of them roses, throughout her pregnancy. In addition to those random social posts, her baby shower seemed way more about the flowers than the catering even, judging from the Snapchats and Instagram Stories. But Kardashian baby conspiracy theorists (seriously, this should be an IRL group therapy event) missed one huge detail when they just assumed that Khloé was going to name her baby girl "Rose" simply because she happens to have a ton of roses and blush flowers in her house and social media timelines. Are you ready to be debunked?

For one, the Kardashian women famously adore roses and blush flowers. And two, Khloé is not about that moniker at all. A fan tweeted this weekend, "I honestly believe that [K]hloe Kardashian’s baby is gonna be named after a flower like rose or something like that." Another fan opted in, writing that the name Rose is "cute."

Khloé responded by saying, "Rose is so cute but no that’s not on my list." So, that's that for the Baby Rose theory, fans.

Even if the Good American designer didn't nix the name idea in a tweet, any true Keeping Up With The Kardashians fan knows that white, pink, and blush flowers are a staple in all of their homes and therefore not a worthwhile indicator of what's going on in their lives. Really — red, pink, blush, and white flowers are a running Kardashian thing. So much so that even Architectural Digest took notice once upon a time. The home design magazine once did a feature on Khloé's flower arrangements, writing:

In fact, beautiful blooms are quite a common occurrence on her social media account, and three varieties in particular: roses, peonies, and hydrangeas. While each is stunning on its own, the blossoms are at their most spectacular when mixed together into one big arrangement.

The magazine added before a slideshow of blooms in Khloé's home dating back to 2016:

When it comes to a color palette, she sticks mostly with pink and white flowers, switching up just the saturation of the shades — the palest pink roses can be found right next to fluffy magenta peonies. Kardashian’s favorite trio of blooms never fails to disappoint, and that’s likely why she turns to it again and again.

This is all to say that pretty, almost pink, flowers have been a mainstay of the Kardashian and Jenner homes for ages, and they are not a great indicator of whether the women are welcoming a boy or girl, or naming their kid Rose or Peony.

When you throw in the home decoration rivalry among Kim, Kourtney, Khloé, and their mom, Kris (all of the daughters blame their mother for copying their design aesthetic at some point and Kris always gloats that her daughters love her taste), it's not clear where this dedication to pink, pretty flowers really began. It's a chicken or Kris Jenner situation.

But Khloé's flower posts likely have nothing to do with any baby's name or its sex. She might not even know what the name is yet. And shouldn't we all just hope for a healthy, smiling baby before judging its name?

All of Koko's sisters (Kylie Jenner included) appeared to name their babies at the very last minute, as so many moms do. Kim Kardashian is even in Kylie's pregnancy reveal video weighing the options of her third child's name — while holding the very same child. So maybe it's best if fans just chill about the name of Khloé's baby for now. These women are the queens of social media drops for a reason. We'll know Khloé's baby name when they want us to know.