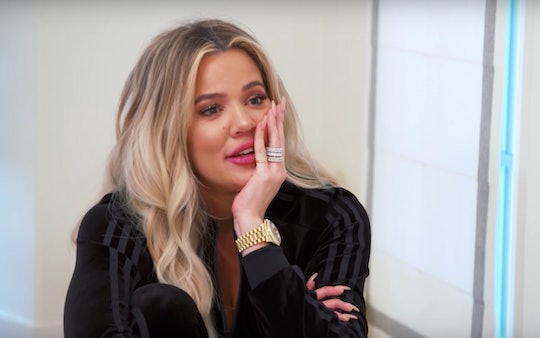 8 Times Khloé Kardashian *Hinted* At Her Baby's Sex, According To Fans

If you're starting to feel some Kardashian Baby Fever fatigue, don't give up yet. There's still so much more baby news that hasn't come our way yet, even though Kylie Jenner's finally announced her baby news and Kim Kardashian officially welcomed her third child last month. Let's not sleep on KoKo's pregnancy at all, since this one is going to be just as exciting. Although the reality TV star told Ellen DeGeneres that she doesn't know the sex of her baby yet, fans think that there have been tons of times when Khloé Kardashian hinted at her baby's sex anyway. And they really know best, right?

Sure, this comes from randomly interpreting Instagram pics and Snapchats for some sign of a baby's sex despite the fact that she said she's staying in the dark as long as possible at her six month mark, but what the heck, right? Just so we're clear: She did tell DeGeneres on Jan. 4 that she wasn't in a rush to find out, saying, "'[I don't know] yet. There's too many surprises in this whole thing that I'm definitely going to know." However, she did tell a fan on Twitter that she'd reveal the sex of her baby on Keeping Up With The Kardashians, at some point.

Khloé confirmed her pregnancy just before Christmas, with an Instagram post of her boyfriend, Tristan Thompson, cradling her bump. The update was more than welcome, since it had been three whole months since the rumors that she and her sister were pregnant surfaced. Since then, Khloé has been more than generous with the bump selfies and honest, hot takes on pregnancy on social media, such as shutting down paparazzi for hounding her when she didn't feel good, dishing about her pregnancy cravings, and even admitting that she's missing her old body.

However, fans are still starving for a sex reveal, which Khloé said herself will be revealed on Keeping Up With The Kardashians this season. So she's going to have to know sometime soon, right? Until that happens, though, here are some moments that less media savvy fans consider ~*hints*~ that Khloé knows her baby's sex already and has been teasing fans all along.

Khloé posted a Snapchat story on Tuesday that was a "dinner party" she was having and everything was blush pink. Fans immediately took that to mean she was hinting that she's having a girl.

2. She Used A Pink Marker

Khloé Snapchatted herself making a vision board and she clearly used pink to spell out the year. This is almost better than ultrasound, according to some fan.

When Khloé made her Twitter header an image of pink flowers, one fan took that as a clear hint as to the sex of her baby.

Using some of Kylie's clues from Snapchat, fans had a theory that a glimpse of three phone cases, two pink, one blue, was a clear sex reveal. But maybe they got it wrong! At the time, people thought Kylie was having a boy because of the blue one, but now we know that both Kim and Kylie had girls. Which means a boy for Khloé?

Khloé's been receiving tons of gorgeous pink flowers, most recently from Tristan himself. Obviously, this mean's she's having a girl, right? One fan commented, "Does this mean it’s a girl?!? I’m so beyond happy for you and Tristan!!! I know how badly you wanted to be a mommy and you are going to be AMAZING." And another just straight up assumed, "so does this mean it's a girl?"

It's true, pink flowers are everywhere. But remember, coral peonies, white roses, and white hydrangeas are sort of her "signature" arrangement, according to Architectural Digest, so this might not be a great thing to bet on.

Recently, she's been rocking a pink manicure, which fans have taken to mean that she's signaling the sex of her baby. Then again, she just posted this photo this week and Kylie had basically the same manicure and pink is a really common nail color... but what do I know? Either way, fans think it's a telling clue.

If you scroll through Khloé's social media accounts, all you see is pink everywhere. Flowers, backgrounds, heart emoji — it's all coming up pink, which to so many people, means a girl.

Remember though, back when the rumors broke the anonymous sources told the press that Kylie was having a girl and Khloé was having a boy, and they were at least right about one so far. Guess we'll all have to wait for the big reveal episode of Keeping Up With The Kardashians to find out.