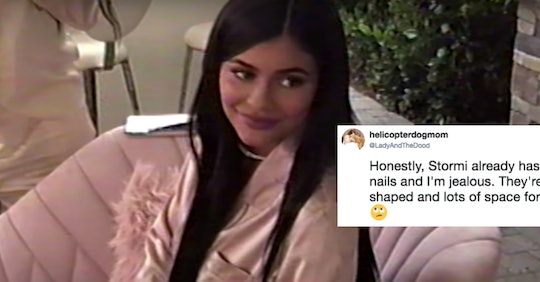 If you want to bring out the best (and worst) in people, just give them some big Kardashian or Jenner news. Although some people are already hating on Kylie Jenner's daughter's name, Stormi, other people were focused on something else entirely. On Twitter, people were super interested and confused about Kylie Jenner's daughter's nails in the picture she shared and to be honest, it was my first thought, too.

In the photo, baby Stormi is holding her mom's manicured finger, putting her whole tiny little hand on display. She's so tiny, but her nails look straight up manicured, with tips and everything. According to the pregnancy reveal video, she was born on Friday, so she hasn't even had a whole week out of the womb to really get these nails going, yet they look so good! It's sort of unfair.

On Twitter, people are losing their minds over the nails and all essentially saying the same thing: Stormi's nails already look better than most of our adult, often professionally cared for, nails. Because of course Kylie Jenner's daughter would be on point like that right out the gate. This sweet little girl has no idea how lucky she is to be born into this family. Soon, she'll probably even have her own glam squad.

Check These Claws Out

It's likely no coincidence that both the baby and mom have their nails done for the name reveal pic. Everything in Kylie's world (and that of her sisters) is highly curated and nothing seems left to chance.

Pretty much everything about this baby's arrival has been highly planned by Kylie and her family and I'm sort of obsessed with it. When the rumors broke in early fall that she and her sister Khloé were both pregnant, Kylie kept mum. She was never spotted out and about by the paparazzi and appeared only rarely on her own social media feeds. When she did post, it was usually a throwback pic.

The family Christmas card, her sister's own pregnancy confirmation, and even the mid-season finale of Keeping Up With The Kardashians came and went with absolutely no sign of Jenner. The rumors about her, her baby, and her relationship with boyfriend Travis Scott were all over the place, but still, she kept her silence.

Then this weekend, she shocked us all with a gorgeously edited video tribute to her daughter and the past nine months of her life. She showed some of the doctor's appointments, spending time with Scott's family, picking our baby Nike's for her kid, her baby shower, and even the birth (though she wasn't on camera the whole time like some of her sisters, which is totally reasonable).

The video and this adorable photo for a name reveal were the perfect package. Now, we just have to wait and see if she'll keep up the hibernation. It's pretty likely that at some point, she'll have to resurface, but she doesn't have to. Her brother Rob has stepped away from the spotlight on and off over the years, too, so it's not like Kris Jenner is forcing them to do anything. You can sell lip kits and contouring brushes off camera.

Kylie's expressed a desire to lay low, too. In addition to often complaining about growing up with so much fame, the 20-year-old once said that she would quit Instagram if she ever had kids. She told ELLE, "Once I have a kid I'm not going to be on Instagram. You know, I'll probably delete my Instagram and just… I don't know, live life."

She added, "I would love to have a family and build a home with a farm in Malibu Canyon and just have my kids and throw away my phone, and just really, like, live my life and not do this anymore."

Who knows what will happen in the coming days and months with Kylie and baby Stormi. But for now, fans will forever be curious about how in the world a newborn has a better manicure than the rest of us.