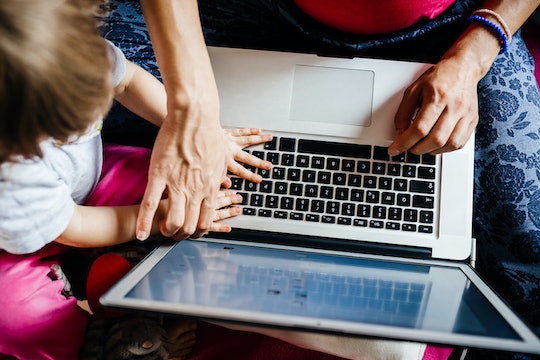 Working from home has become the new norm for so many parents during COVID-19, but it's not all pajama days and sourdough starters. In fact, kids are interrupting parents' Zoom meetings around 25 times per week, according to a new survey. And trying to figure out how to work from home, deal with child care, and facilitate school schedules that are frequently in flux is leaving parents feeling stressed out and overwhelmed.

OnePoll recently conducted a survey of 2,000 parents of school-aged kids across the country on behalf of Sittercity to find out how parents are dealing with the juggling act that is parenting, work, and school during COVID-19. According to the survey, trying to work from home with school-aged kids also doing classes in the home has proven difficult for everyone.

Specifically, parents reported that kids were interrupting work calls and Zoom meetings an average of 25 times per week, wandering in during a work video or a client call. These kind of interruptions might sound relatable and cute, but not every boss is understanding. One mom even alleged that she lost her job after her employer became frustrated that her children were too loud during work hours.

Kids aren't the only ones doing the interrupting, however. The same survey found that parents had also interrupted their kids during their school work, although not with the same frequency. Just six times since the beginning of the school year, in fact.

Parents reported some other disruptions to their work and school schedules like an average of six WiFi resets per week and four "in-class" snack requests per day from hungry kids.

Home life has seen significant changes for parents who took part in the survey, and not all of them are bad. Parents in households where work and school are being done remotely reported that "pajama day" is happening an average of five days per week, which some might see as a positive, while families are eating six more meals together per week than they did in pre-COVID times. The majority of parents (64%) whose kids went back to full time school admitted that they were sad to see the extended family time disappear.

Still, the survey found that things are exceedingly complicated for parents working from home in 2020. Especially since the average parent admitted that their child's school has cycled through four different plans already, which makes seeking out child care difficult. While 69% of respondents said they would normally seek out an older relative to help out, most said they no longer feel comfortable with that option, and 26% have not yet solidified a child care plan.

"The daily interruptions and the constant switching of hats is adding up for parents. Parents are overwhelmed and on the verge of burnout, and the data from this survey shows why. We’re seeing families come to our platform everyday looking for support, flexibility and a bit of control in the face of so much ongoing uncertainty," Elizabeth Harz, CEO of Sittercity, said in a statement to People.

Working from home during the pandemic has proven to be particularly difficult for moms especially. Being interrupted 25 times per week by a kid who is hungry or bored or irritable appears to be part of this tricky new norm.

More Like This
Michigan Right-Wing Group Wants To Erase LGBTQ+ Sex Ed
10 Great Podcasts That Will Keep Your Kids Entertained On Your Next Family Road Trip
Teacher Shot By 6-Year-Old Student Told School He Had A Gun, Was Told To "Wait"
Florida Teachers With “Unvetted” Classroom Books Could Face Felony Charges
What Parents Are Talking About — Delivered Straight To Your Inbox