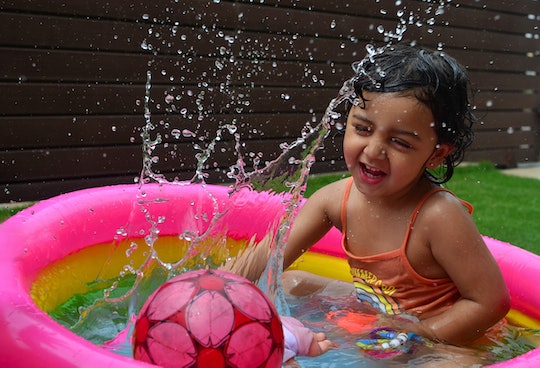 Even Those Inflatable Backyard Pools Can Pose A Drowning Risk, A New Warning Says

With many vacations canceled and lots of community pools closed due to the pandemic, more and more families are taking the plunge this summer and buying backyard pools. (One local pool repairman in my own tiny town in Virginia told me he’d installed six inground pools over the last month alone.) It's happening across the nation, with some families even moving to new homes with pools. But with this pool boom comes an added concern, which is that kids' drowning risk is higher.

The worry is so great that this week the American Academy of Pediatrics (AAP) issued a public service announcement urging new pool owners to “consider adding a four-sided fence to keep children safe from drowning.”

“Because of the pandemic, families might be tempted to go out and buy a pool, whether that’s a big inflatable pool or a little wading pool,” pediatrician Ben Hoffman, M.D., FAAP, chair of the AAP Council on Injury, Violence & Poison Prevention says in the PSA.

“If you are buying a larger pool, it’s important to think about fencing or other barriers so kids can’t get to the water when they’re not supposed to be swimming. For smaller pools, be sure to empty them right after every swim time."

One might think that with so many parents home right now, the fear of drowning would decrease, but anecdotally, Dr. Hoffman tells Romper that's not what pediatricians are seeing and hearing. And though there's no hard data yet, in Florida there are reports of increased drownings due to the pandemic. About 70% of drownings for younger kids happen "when it’s not swim time," according to the PSA, which suggests that parents might not have known kids were even near the pool when the drownings occurred.

The hard truth is that drowning is the leading cause of death in children between the ages 1 and 4, says Dr. Hoffman. The risk is also exacerbated this year by the fact that many swim lessons have been canceled this year over coronavirus-related concerns. With fewer children learning to swim, and, in many cases, no lifeguards at beaches, the threat of drowning is especially high.

Which is why Dr. Hoffman encourages a layered approach to water safety this summer. First, he says it's critical to install fencing around pools, in ground or above.

"A fence is the single most effective intervention," says Dr. Hoffman. "A four-sided fence with locking gate, decreases the chance of drowning by 50 percent." The key is to install a fence that children can't climb over.

Next is to get your children swim lessons if at all possible. And note, the earlier they can start the better. Dr. Hoffman says lessons should begin at age one.

"We should be thinking about water competence as an essential life skill," he says likening it to the importance of driver's ed. "We do our best to make sure teens can drive," he argues. The same should go for swimming. A "lack of water competence" is an issue minority communities deal with at a higher rate; according to NPR, “a history of discrimination at pools nationwide in the 20th century has led to startling racial disparities in swimming abilities." Today, 6 out of 10 Black children have “low to no swimming skills,” according to a 2017 USA Swimming Foundation report.

Dr. Hoffman also cites guardian accountability as crucial to keeping kids safe. "Children need constant capable adult supervision. There needs to always be an adult whose job is to be the supervisor. That means no beer, no book, no phone," he says.

And finally, Dr. Hoffman adds, parents need to make sure that their children's floatation devices are Coast Guard approved. "Anything that inflates should be considered nothing more than a toy, you can't trust them," he says. "Instead, google Coast Guard approved to find the best swim safety gear.