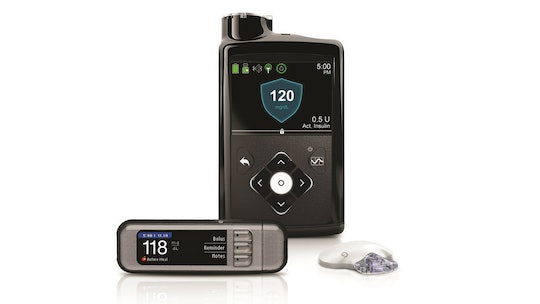 Kids With Type I Diabetes Could Get Artificial Pancreases

In the U.S. there are nearly 200,000 youth living with Type I diabetes. By 2050, that number is projected to double. Unlike the type of diabetes people develop later in life (Type II), Type I diabetes begins in childhood. It's sometimes called "juvenile diabetes" for this reason. Diabetics of every age need to monitor their blood glucose levels and inject themselves with a hormone called insulin. A new technology that makes that process easier is on its way to being approved for use in young children. How early can kids with Type I diabetes get an artificial pancreas? A new study says children as young as 5 might be able to safely make use of the tech.

There are actually two types of diabetes, though most people are more familiar with Type II. In our bodies, an organ called the pancreas produces a hormone, insulin, which helps the body regulate blood sugar levels. People with Type II diabetes develop the disease later in life when their body stops using the insulin their pancreas produces correctly, which means their body is no longer able to control blood sugar levels. On the other hand, people with Type I diabetes — often called juvenile diabetes — have a pancreas that doesn't make insulin at all. According to the Juvenile Diabetes Research Foundation (JDRF), the symptoms of diabetes show up very early in the case of Type I, and it's a condition that lasts a person's entire life. They are what's called "insulin-dependent," which means they will always need to inject insulin into their bodies to make up for the fact that their pancreas doesn't produce it.

Traditionally, people with Type I diabetes have to use several tools to make sure their blood sugar stays in a healthy range. Glucose monitors take a small prick of blood from their finger to tell them what their blood sugar levels are, and a pump they can wear will let them inject insulin into their bodies to help adjust those levels accordingly. For years medical researchers have been developing better technology for this process, and in 2016 the FDA approved the first "artificial pancreas" for Type I diabetics to use. The device, made by a company called Medtronic, was initially approved for those age 14 and up with Type I, according to the FDA. More research was needed to make sure the medical device would be safe for younger children with the condition.

The way children's bodies work is vasty different than adults, and that extends to any diseases or health conditions that they have. In general, blood sugar levels can be influenced by lots of factors: what a person eats, how much physical activity they're getting, and other kinds of physical stressors, according to the American Diabetes Association. Researchers wanted to be sure that a device like an artificial pancreas wouldn't just be safe for kids with Type I diabetes, but that it would actually help them (and their parents) safely and effectively manage the condition.

The research, conducted at the University of Virginia, found that not only was the device safe for children as young as 5 years old, but that it greatly improved blood sugar levels in kids with Type I diabetes over traditional methods of insulin delivery. Kids with the artificial pancreas had high blood sugar levels (above 180 mg/dL) just 25.8 percent of the time — compared with 51.5 percent with the usual monitoring and insulin delivery routines they used at home.

The research done by UVA will hopefully lend itself to the FDA approving the artificial pancreas for use in younger children. If it's anything like the initial approval, it could happen sooner rather than later: according to CNN, Medtronic's device was approved six months sooner than expected. UVA's research is being presented at the Endocrine Society's 99th annual meeting in Florida on Tuesday, according to their press release.