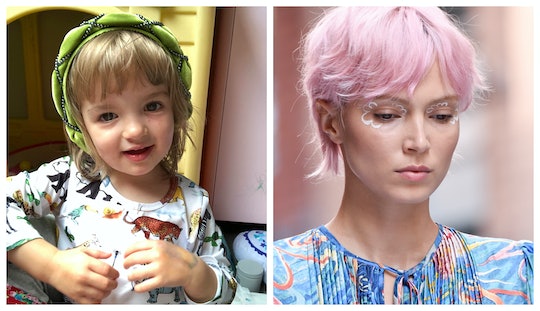 Can Someone Make Kids' Clothes For Adults, Please?!

Have you ever dressed your child in the morning only to find yourself asking (begging) the universe, "Can someone please just make this in my size?" My daughters, ages 2 and a half and 1, give me serious style envy on a near-daily basis. Whether it's their space-print dresses covered in aliens, rockets, and planets, or those zebra-print leggings that feel so damn soft and look so damn comfy, or even the pair of sparkly-ass glitter shoes resembling an elevated version of Dorothy's, there's nothing I don't yearn for — there's nothing that doesn't make me wonder why no one is making kidswear for adults.

It's a sentiment I hear frequently, both about my girls' looks and those of other people's offspring. "I wish they made that in my size," someone may muse upon gazing at my daughter's fried egg-print pants. "Don't you just want to wear everything they do?" a friend will ponder during a mom hang. "Why can't we wear such fun things?" one dad acquaintance recently wondered aloud the last time we met.

Four thousand sizes too small, it's wholly inaccessible to us.

It may seem like a small qualm in the grand scheme of things — nothing to dwell over when there are diapers to change, purees to puree, nursery rhymes to sing, or peed-on sheets to swap for fresh ones. Still, every time I find myself browsing the children's sections of shops, putting clothes on my own babes, or comparing the sartorial options available to me as a 28-year-old woman versus the ones available to the humans I made, I cannot help but feel a little ripped off.

I know, of course, that not all grown-ass-adults want to wear dresses covered in farm animal motifs or rain coats repping extraterrestrials. Not everyone wants sparkly Mary Janes or a rainbow-colored fur coat. "Fun fashion" undoubtedly means something different to everyone, depending on our individual tastes. This is all as it should be, of course.

For some of us, however, "fun fashion" — even "aspirational fashion" — is exactly what's sitting in our babies' wardrobes. Four thousand sizes too small, it's wholly inaccessible to us. Still, I cannot help but want to rock the dreamy, magical vibes those kinds of pieces evoke. I can't help but feel that the lack of comparable clothing options for adults is a sign of something cultural. Something bigger. Something kind of sad.

One time, a fellow carer actually told me, 'You know you don't have to do that, right? You should just leave them to it. Makes it easier for everyone.'

It's almost as if this particular breed of fun fashion is off-limits to grown-ups because we aren't supposed to be active participants in play-time. As we get older, more "responsible," and more settled into the adult routines that would've quite likely bored our younger selves half to death, we are no longer meant to have the kind of fun our 2- or 5- or 12-year-olds are having. We're not supposed to daydream about aliens or unicorns. We're not supposed to find joy in dressing like princesses or astronauts. We're not supposed to want to slip into our Halloween costumes on any regular, old Wednesday.

Instead, we are expected to go through the motions. From my experience, parents who are present for the children they are raising, specifically present in play, are typically thought of in favorable terms, so long as they themselves aren't enjoying the land of make-believe too much. I notice this if ever I take my children to the local indoor play gym and dare to actually play with them while we're there. It's expected that I participate in terms of taking them, but chasing them around the place while pretending to be a monster? Not so much. One time, a fellow carer actually told me, "You know you don't have to do that, right? You should just leave them to it. Makes it easier for everyone."

Pretending to be a monster is, I guess, a ridiculous thing for an adult to do. Much like wanting clothing covered in monsters is, too. Because we most often see these quirky styles on children, the imagery on them is ultimately considered juvenile. For an adult to wear them opens that person up to infantilization, accusations of immaturity, or assumptions about their character, their capacity to exist in the grown-up world, or even their ability to be a parent when they themselves are so childish.

In reality, preserving the sense of wonderment we carried with us as children is, I believe, one of the raddest ways we can connect to our kids. Wanting to participate in imaginative play, in make-believe, or in mystical, fictional beings isn't shameful. It's certainly not something that should be reserved for kids and only for kids.

I know I'm not alone in the desire to wear kidswear as an adult. I know it because almost every time I am in public with my girls, someone tells me how much they love their outfits; someone reflects on how cool it would be if a designer made "stuff like that" for us.

It sure would be cool! It would feel pretty important, too. An acknowledgment that play-time — be it the fun that is dressing up, freely experimenting with style, thinking about magical creatures, or daydreaming about being a dinosaur — doesn't have to end just because we are no longer small.

More Like This
35 Relatable Quotes That Prove Being A Mom Isn’t Easy
I Found Gender Euphoria In My Second Pregnancy
Ginger Zee Had A Perfect Response After A Troll Asked Her "Who's Raising Your Kids?"
It's A Beautiful Day In Jenny Slate’s Neighborhood