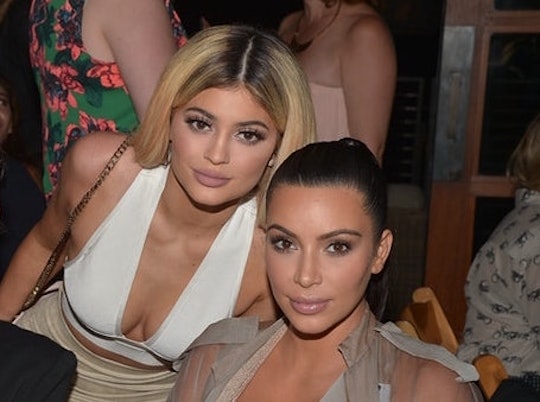 Kardashian fans have seriously lost any sort chill they may have had, rejoicing over Kylie Jenner's epic and emotional baby reveal. Several of the Kardashians have expressed their love on social media and now Kim Kardashian has celebrated Kylie Jenner giving birth with the sweetest note shared on her app. The mom of three couldn't help but gush over her little sister's beautiful creation and this heartfelt message shows that she and Jenner are really are everything a sister should be to one another.

In a heartwarming video, titled "To Our Daughter," that Jenner posted on YouTube on Super Bowl Sunday, Jenner's pregnancy journey was shown from start to finish. The video revealed that Jenner gave birth to her little one on Feb. 1, but her firstborn's name has not yet been revealed, according to People. Today, on Monday, Feb. 5, Jenner's sister Kardashian reposted the video on her app, along with a congratulatory message. Us Weekly reported that Kardashian's sweet message stated:

Mommy Kylie!!! You did it!!! I’m so incredibly proud of the woman you have grown up to be and I know that you are going to be the best mom to your new baby girl! ... I am so proud that you do what you want to do and live your life the way you want, you will pass down all of those amazing qualities to your baby girl. You were made to be a mom! I love you!

How unbelievably sweet is that?

This wasn't the time first time Kardashian shared her excitement for Jenner. Last night, she also posted a cute tweet with an emoji of a baby and two hearts, linking to Jenner's announcement.

For months, rumors have been swirling and people have been wondering about Jenner's unconfirmed pregnancy, according to Cosmopolitan. She has kept out of the spotlight and revealed on her Instagram account yesterday that she chose to keep this journey private while it was going on in order to provide a stress-free environment for her unborn child. Any mom out there can understand that, right? As Jenner explained why she had been MIA from fans:

I’m sorry for keeping you in the dark through all the assumptions … pregnancy has been the most beautiful, empowering, and life changing experience I’ve had in my entire life and I’m actually going to miss it. I appreciate my friends and especially my family for helping me make this special moment as private as we could.

In Jenner's baby reveal video, another major reveal went down, as reported by HuffPost. Fans have been wondering when the first photo of Kardashian's daughter Chicago West would be revealed, but they got something even better: an actual video. The video footage showed Jenner meeting her little niece and learning little Chi's name, which was so adorable.

Kardashian isn't the only member of the family extending her congratulations and well wishes online for Jenner. Matriarch Kris Jenner posted the following words of excitement on her own Instagram account:

God is SO good!! I am so excited and thrilled to welcome another precious baby girl to our beautiful, ever growing family. We are blessed beyond belief!

And, Jenner's sister Khloe Kardashian, who is also pregnant, posted an incredibly sweet moms-to-be photo of herself with Jenner on Instagram, along with these sweet words:

Congratulations My Sweet Kylie! What a magical ride it's been! I'll miss you bumping along with me. Never in a million years did I think we would do this together but it's been that much more special because of it. God is so great!! He had His plan all along! I love you little mama. love big mama.

Jenner certainly has a great support system around her during this special time in her life.

Kim Kardashian's third child, little Chicago West, was born on Jan. 15, according to People, which means that Jenner's baby is only a couple weeks younger than Chi. And, Kardashian stated on her app that she cannot wait for the two little girls to be besties, as reported by Us Weekly. How lucky is Jenner to have her big sisters having babies at the same time? What an amazing journey and special bond to share together.