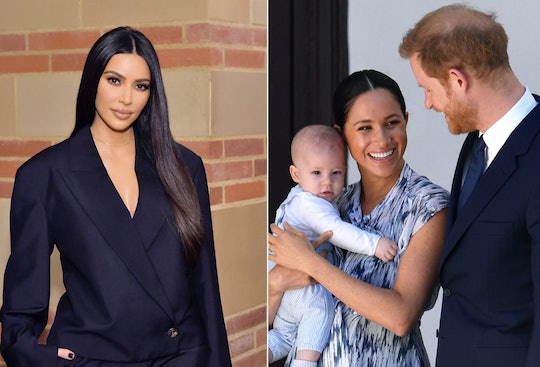 As A Mom, Kim Kardashian Said She Empathizes With Meghan Markle & Prince Harry

If there's anyone who can come close to understanding the level of near-constant criticism that members of Britain's royal family face, it's likely to be a member of reality TV's so-called royal family, the Kardashians. In fact, Kim Kardashian said she empathized with Meghan Markle and Prince Harry's struggle for privacy as a fellow parent in an interview with Australia's The Sunday Project.

"I think everyone has their own journey," the Keeping up with the Kardashian star told The Sunday Project's Lisa Wilkinson when asked if she, as a member of one of the world's most-famous families, has any sympathy for U.K. royals Markle and Prince Harry.

"I think their journey is extremely personal, with what his mother experienced and how her life was so affected by the spotlight and by paparazzi," she said. "So I don't think anyone can really understand what that's like except for them."

That being said, Kardashian went on to say that, as a mother, she empathized with the royal couple's need for privacy and safety. "I think as I'm older and as I have kids, and what I would want for them is just the safest place, I can definitely empathize with their need for having a secure, safe place and taking time for themselves and having privacy when they need it," the reality TV star said.

Since taking their relationship public in 2016, Markle and Prince Harry have faced intense media scrutiny. Unfortunately, their marriage in 2018 and the arrival of baby Archie earlier this year have served only to heighten the amount of negative headlines and criticism the couple has received. This year alone, Markle has been criticized for everything from how she holds baby Archie to where she plans to spend Christmas.

In response to some of the coverage, Markle and Prince Harry have opted to take legal action against a few British tabloids for coverage they deemed to be "bullying." (Similarly, Kardashian also has experience pursuing legal action against online gossip sites). What's more, Prince Harry has spoken candidly about how he has seen some similarities between how the press treated his mother and the coverage his wife receives.

"My deepest fear is history repeating itself," the Duke of Sussex said in a statement released earlier this year. "I’ve seen what happens when someone I love is commoditized to the point that they are no longer treated or seen as a real person. I lost my mother and now I watch my wife falling victim to the same powerful forces."

Although Kardashian said she empathized with Markle and Prince Harry fight for more privacy (especially for their son, Archie), the reality TV star told The Sunday Project that privacy isn't her top concern. "I'm not one of those people that will complain and say 'ugh, I don't have any privacy' or like 'my life is so different,'" the star, who skyrocketed to fame after her family opened their homes up to reality TV cameras in 2007, said. Instead, Kardashian cited keeping up with friends as the hardest part of her celebrity status.