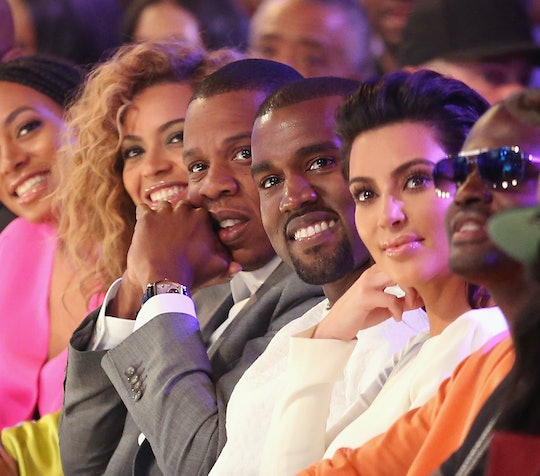 On Wednesday, Beyoncé announced to the world that she is expecting twins, and naturally, everyone promptly lost their minds. Her pregnancy Instagram post quickly became the most liked photo ever, countless articles were written about the fact that she's basically turned celebrity pregnancy announcements into a literal art form, and social media is still trying to recover from the fact that Queen Bey just dropped the only news that could feel hopeful and exciting at a time when pretty much everything else making headlines is feeling totally grim. But amidst all the celebration, a wave of Kim Kardashian memes about Beyoncé's pregnancy have begun making the rounds on social media, and while they're supposed to be funny, they really just feel kind of sad.

Following the headline-making announcement, Twitter users began skewering Beyoncé's rumored frenemy Kim Kardashian, suggesting that she must be super jealous of all the attention being lavished on someone other than her. Much has been discussed about the fact that Kardashian has yet to publicly congratulate Beyoncé, according to The Mirror, and given the maybe-feud she and husband Kanye West reportedly have with the Carters, it's easy to joke about the possibility that Beyoncé's pregnancy is really getting under Kardashian's skin. But the idea that pregnancy is a competition for fame and relevancy is yet another facet of the already unfair narrative surrounding celebrity pregnancies. And honestly, it seems like way past time we all got over it.

There's no doubt at this point that Beyoncé is a completely unrivaled expert at managing her own public persona. Rumors swirling about alleged infidelity in her marriage with Jay Z? Boom, she drops Lemonade, her unbelievable "visual album," and swiftly reminds us that, not only is she a genius, she's also going to make sure she has the last word. Now, with her pregnancy announcement, she has basically given the world a master class on getting out ahead of a total headline-grabbing life event. Instead of letting the rumor mill ramp up, or taking the traditional route of giving an interview or releasing a statement, Beyoncé went ahead and redefined celebrity pregnancy announcements entirely, delivering, as The Atlantic's Spencer Kornhaber aptly noted, "something that could hang at a gallery."

But even if her announcement was carefully calculated, and even if she is celebrity royalty, Beyoncé is also a mom who seems honestly excited about the fact that she's expecting, and that is wonderful and worth celebrating. And yet, she may have not even necessarily wanted to share the news so publicly — she certainly wouldn't be the first celeb mom to share a pregnancy photo more out of a desire to avoid having to hide than out of wanting to actually celebrate the news with the world (Anne Hathaway, for example, posted a photo of herself pregnant in a bikini on Instagram because she'd been photographed by paparazzi and didn't want to give them the benefit of having the scoop without her consent, according to CNN.)

Then there's Kardashian. Given her over-the-top life and image, she has easily become one of the easiest celebs to poke fun at for a laugh. A popular argument seems to be that she deserves it — that it's the price she pays for being someone who has made a literal fortune off of publicizing the minutiae of her life — but even if you agree with that assessment, is it true in all cases? After all, the last time Kardashian became a major target for ridicule was after she was held at gunpoint and robbed in her hotel room during Paris Fashion Week, according to Vogue, even though it's hard to imagine how that could have been seen as even remotely amusing or satisfying.

But whether you love Kardashian or hate her, there's also the fact that, well, she might actually very well be jealous of Beyoncé's pregnancy announcement. Not necessarily because she is a narcissist who just cares about fame and money, but because the truth is that sometimes women are jealous about pregnancy announcements, for reasons that are actually quite painful.

Motherhood — and especially pregnancy — is something that's been placed on such a high pedestal for women, and in most cases, it's one of the few times when pretty much everyone a woman meets will lavish praise and attention on her for one of her life choices. It doesn't matter if she got pregnant intentionally, it doesn't matter if she's ambivalent about becoming a mother, it doesn't matter if she feels terribly sick, or if she hates being pregnant, or if she's really scared about the massive life change that's about to occur in her life. Chances are she is still going to be constantly told how wonderful it is, how happy she should be, and how radiant she looks even if she feels constantly nauseated and bloated and uncomfortable.

As much as we judge pregnant women (don't gain too much weight, but don't gain too little; don't eat sushi or soft cheese or drink coffee, but make sure you enjoy every second of this magical time!), we also offer validation and attention in a way that doesn't really happen any other time. (Not convinced? Just ask any woman who has posted her own pregnancy announcement on Facebook to a collective freak out from anyone she's ever added as a friend.)

But what happens then, if you're the one who isn't pregnant? If you want to be pregnant, but it's not happening? If you've lost babies, or got pregnant but it was a nightmare of complications and misery? Kardashian has spoken openly about her challenging pregnancies with North and Saint, including dangerous struggles with preeclampsia, a premature delivery with North, and just general pregnancy discomfort and misery. What some people may not realize is that, for women who haven't had the magical, happy, sunshine and rainbows pregnancy experience that it seems like you're supposed to have (or if you haven't been able to get pregnant at all), seeing other women appear to be having those kind of pregnancies can really sting. Even if you don't even want to have more children, seeing a friend announce her pregnancy (with twins, no less!) really can be jealousy inducing. And it has nothing to do with wanting fame or attention.

Of course, it's also entirely possible that Kardashian really is good friends with Beyoncé, and that she really is happy and excited for her. Or maybe the memes are right, and she's furious. Maybe she's feeling something in between, or something else entirely. And yes, having a laugh at Kardashian's expense is fun to do. But the concept of pregnancy as a competition is honestly something that can be upsetting to a lot of women, and it's a completely unnecessary and irrelevant discussion. So maybe we can all just be happy for Beyoncé and her babies-to-be. Or, if not, maybe we can at least put the pregnancy punchlines to rest.