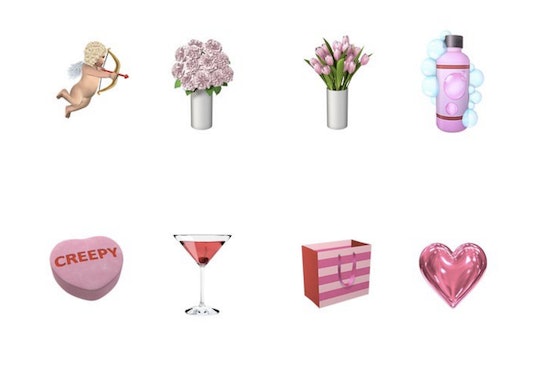 Have you been wondering how you're going to tell that special someone how you feel? Your best friend that you'd be nothing without her? That creep that he's creeping way too hard? Good news! Now you can without saying anything at all. Kim's Valentine's Day Kimoji Pack is the meaning of true love and so much more.

It can be hard to know when someone truly loves you. Even the most experienced romantics can have trouble reading the signs. But there's no doubt here: Kim Kardashian West just showed her fans that she really loves them. Last week, she gifted fans a major update to the already legendary Kimoji app. Now, there's even more Kimoji to spice up your texting vocabulary. Not only do fans get the beauty, nay, pure art, of a GIF of Kardashian smacking her sister across the face with her purse, but now they get a whole slew of Valentine's Day-themed Kimojis, too. Why? Because emojis speak louder than words and a GIF is worth 1,000 pictures.

Some of the Valentine's Day Kimojis are classics: a bouquet of red roses with a note that says, "I love you," a little chapel, a bouquet of white roses, a vase of pink tulips, a shiny heart, a red package tied up with a bow, a thick slice of red velvet cake, a fat cupid with a bow and arrow. Others are anti-love (because that's useful, too): a heart with a knife through it, a book that says, "He's just not that into you," a candy heart that reads, "Ratchet," a broken heart, a full glass of rosé. Others are both utilitarian and x-rated: a tampon, a couple in bed, a suggestive bottle of bubble bath, a lipstick-stained wine glass, a can of whipped cream, furry handcuffs — you get the idea.

This latest enhancement of an already great thing was just what fans needed. No, not someone to spend Valentine's Day with, but, rather, someone who understands them. It's as if Kardashian can read minds. "If only I had an emoji that was a gigantic blunt, or, like, a pink martini. Or both," fans said (they didn't really, but apparently that's what Kardashian heard). "If only I could tell my friend that the guy she's going for just isn't into it, but without making her mad," they thought.

If anyone understands the simple pleasures in life, it's Kardashian. This Valentine's Day, be prepared: download this package of indispensable Kimojis and you won't be at a loss for words, no matter what happens. And if nothing does, well, at least you have something useful the next time you need a tampon from your friend and typing "need tampon!" is just too difficult.