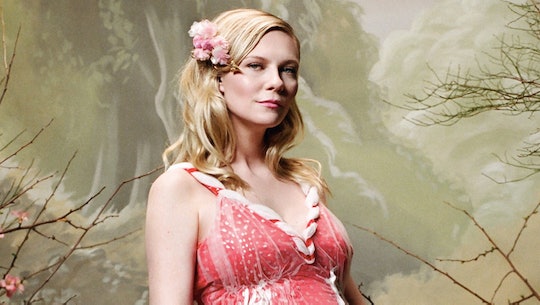 The bar is set pretty high for celebrity pregnancy announcements ever since Beyoncé broke the internet with her gorgeous photo shoot. Whether she meant to or not, the way that Kirsten Dunst officially confirmed her pregnancy by appearing in the 2018 Fall Rodarte look book might be a close second for "most epic pregnancy announcement ever." She looks like a total fairy tale.

Dunst cradling her pregnancy bump didn't come as a huge surprise to fans, as there had been rumors that Dunst was expecting her first baby with her fiancé Jesse Plemons for months. But this was definitely the most fashion-forward way to confirm the news. For those who don't comb through Vogue magazine every month, Rodarte is a Los Angeles based fashion brand founded by sisters, and designers, Kate and Laura Mulleavy.

They announced the look book with a statement, according to E! News, saying, "We are thrilled to feature women who inspire us in our Fall Winter 2018 portrait series." The look book, styled by Shirley Kurata and Ashley Furnival, also features Reese Witherspoon's daughter Ava, The Walking Dead 's Danai Gurira, and Thor: Ragnarok’s Tessa Thompson, among other celebs, such as Kim Gordon and Gia Coppola, and Chloe X Halle.

Not only are the clothes and photos totally dreamy, it's refreshing to see all different kinds of women, including a pregnant Dunst, featured in the shoot.

According to People, Rodarte is also designing Dunst's wedding dress, so this pairing was perfect. There's no wedding date yet, but Kate and Laura Mulleavy are apparently hard at work on the gown. Kate told People last year after directing Dunst's latest film, Woodshock :

It’s exciting. How many directors make a wedding dress for the person in the film and then make other dresses that you wear? It’s actually really strange but it means a lot. I think we’ve actually only done a handful of wedding dresses in our career, and we’ve only done them for people that we’re really close with because it’s an emotional thing, when you wear it to get married … it’s just a magical thing to create that’s kind of going to be exciting.

Plemons and Dunst met on the set of FX's Fargo, in which they play a married couple. They announced their engagement last year, but are definitely taking things slow, which might have something to do with Dunst's pregnancy. It's not like she wasn't planning on having kids, though. Dunst told Marie Claire UK in June 2017 that she was ready for little ones.

"I'm at a stage in my life where I'm like, 'I've been working since I was 3. It's time to have babies and chill.' You know what I mean?," she told the magazine, though someone should probably break it to her that "chill" is a strong word for what it's like to spend time with a newborn. The 35-year-old actress is looking forward to motherhood regardless, though. She added in the same interview:

I wasn’t one of those “I need a baby!” people until my goddaughter was born. I love her so much. That love is just like… you can’t experience that unless you have a kid. I put her to bed last night and she woke up this morning and said to her mom, “Where’s Kiki?” I just love that love. That’s what I want.

It looks like her plans to settle down are well underway already. With a husband she adores, a gorgeous pregnancy photo shoot, and a renowned designer diligently working on her wedding dress, it's safe to say that Dunst is definitely living her best life these days. Not like we'd expect anything else, of course.