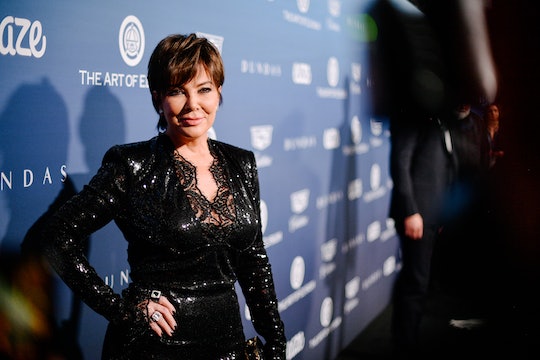 Kris Jenner Says Grandson Saint Had Allergic Reaction To What?!

Kris Jenner has had a lot of experience with kids as a mom of six (and grandmother to even more). But that doesn't mean that every day comes with smooth sailing, especially when it comes to her super young grandkids. Every day is a learning experience for her. In a new interview, Kris Jenner revealed Saint had an allergy attack while on vacation in Palm Springs, California, but there is no need for people to worry because "all is well" (thank goodness).

Kim Kardashian and her husband Kanye West's family of three is super adorable. Their kids — 5-year-old daughter, North, 3-year-old son, Saint, and 1-year-old daughter, Chicago — always seem to be living their best lives and having the most fun, ever. But things reportedly got a little shaky when they took a trip to Palm Springs for Coachella, according to People. In an interview earlier this week, Saint's grandmother, Jenner, revealed to Refinery 29, that she had a temporary moment of panic during their little vacation to the desert.

"The most recent one that comes to mind is a week or so ago when we went to Palm Springs, and Saint, my little grandson, we discovered he might be allergic to grass," she said. "We ended up in the E.R. but all is well — we figured it out."

Luckily, Saint is OK — but this is a little shocking to find out, especially since Kardashian didn't share this with her followers on social media when it happened (for obvious reasons), according to Page Six.

Kardashian and her children were in Palm Springs last weekend to see West host one of his famous "Sunday services" at Coachella on Easter Sunday, according to Entertainment Tonight. During the service, West performed some of his songs (both new and old) on top of a grassy mound, with all of his family members in attendance. In addition to making an appearance at the music festival, Kardashian and her family members also went on a hike where they encountered some frightening looking spiders.

Although this was a scary experience that Kardashian and her family members might have had, people have to respect her privacy and reasons for wanting to keep it to herself. Not everything about her children needs to be shared online — especially something as simple and as scary as an allergy attack.

In the same interview, Jenner revealed that this wasn't the first time where one of her grandkids had an unexpected allergic reaction. Her oldest grandson, 9-year-old Mason Disick, also had one, too. "... Mason ate peanut butter and his face started blowing up and his throat started closing," she said. "They had to rush him to the hospital. He had a peanut butter allergy for the longest time. He's fine now. The scariest is always the first time."

Luckily, she was equipped with experience when it came down to dealing with Saint's most recent allergic reaction. And if that ever happens again with any of her nine grandchildren, she'll know just what to do in a moment's notice. This is what makes one excellent and resourceful grandma, like Jenner herself.