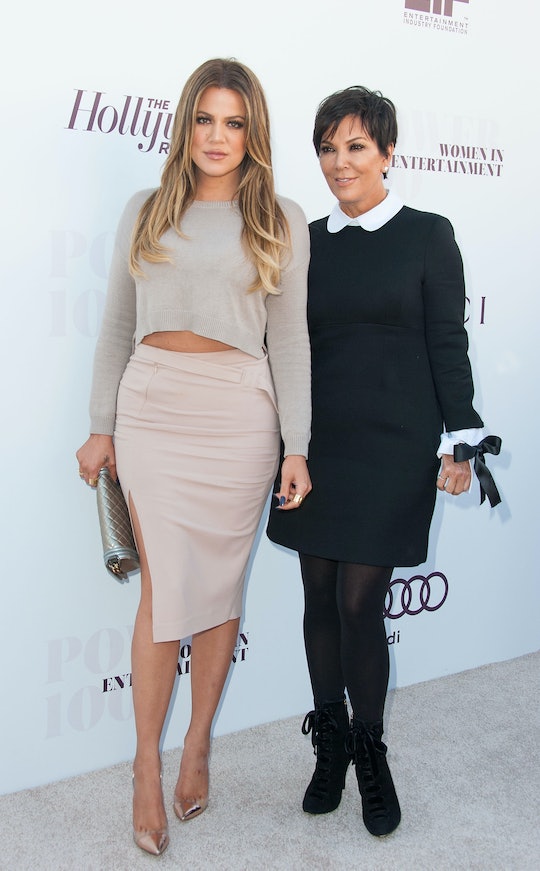 The day has finally come! After months and months of waiting, Khloé Kardashian is now officially a mom and reportedly welcomed her baby girl early on Thursday morning, according to TMZ. Khloé's reported birth is bringing out so many emotions for everyone involved, and diehard Keeping Up With The Kardashian fans know that Kris Jenner's reaction to Khloé Kardashian giving birth to her first child will probably top them all.

After all, Jenner isn't just a mom, she's a grandma to eight grandkids now, so she's not only a seasoned pro, but also has been totally supportive of her daughter throughout her pregnancy. When Kardashian finally confirmed that she was pregnant back in December, Jenner took to social media the very next day and reposted her daughter's sweet photo.

"God is so good!! I am beyond excited! What a blessing!!!!!!!" she wrote under the same photo of Kardashian and boyfriend Tristan Thompson cradling the mom-to-be's pregnancy bump. So, even though Jenner has yet to publicly congratulate her daughter on her happy news, the time will probably come pretty quickly, and her message will likely be short and sweet.

Of course, fans shouldn't expect the grandmother to take to social media any time soon, as everyone is probably taking time to rest and bond with the latest addition to the growing family. But while Jenner hasn't really posted an official congratulations to her daughter, she has reposted the following Instagram from W Magazine, along with the simple caption, "BLESSED!!!"

Clearly, Jenner is just overjoyed at her daughter's happy news. Previously, in addition to her sweet response to Kardashian's pregnancy announcement, Jenner also took to Instagram to express her excitement at her daughter's announcement that she was going to have a baby girl. On March 5, Jenner took to Instagram to share her excitement about having a new granddaughter:

It's a girl!!! SO blessed!! I can’t wait to welcome another beautiful baby girl into our family! Congrats my beauty @khloekardashian and @realtristan13 !! God is good!!

So, when members of the Kardashian-Jenner family decide to let their social media followers know for sure that the 33-year-old has given birth, the matriarch will likely do so as well, with a predictably loving and kind post and well wishes. Of course, all of this happy news also comes at a tense time for Kardashian, as cheating allegations about her boyfriend and the father of her child, Thompson, have been swirling since Tuesday, after the Daily Mail released footage that purports to show Thompson kissing another woman. There has been no confirmation that it is Thompson seen in the video. Romper's requests for comment from both Thompson and Kardashian's team regarding the cheating allegations were not immediately returned. Neither Kardashian nor Thompson has commented publicly on the claims on the rumors.

The Good American founder and designer reportedly welcomed her daughter into the world on Thursday, April 12, at around 4 a.m. EST, according to TMZ. And despite the cheating allegations surrounding her boyfriend, hopefully Kardashian will be able to be happy for her new life, with her friends and family by her side.

At the end of the day, Kardashian will always have her family, so matter what happens with her and Thompson. And even though momager Kris Jenner has yet to publicly react to her daughter's delivery, it will definitely be perfect when it does happen.