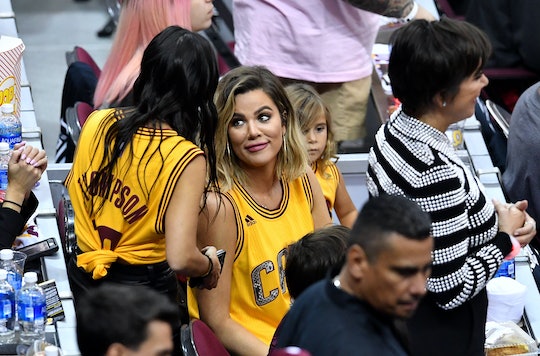 Khloe Kardashian Confirms Her Pregnancy, But Fans Are Still Confused About One Thing

Oh, hi. Unless you were living under a rock, you probably heard some rumors about a few members of the Kardashian-Jenner family expecting babies in 2018. While Kim confirmed a weeks ago, everyone's been waiting for Khloe and Kylie Jenner to spill the beans on their rumored pregnancies. Now you have to wait no more — Khloe Kardashian has confirmed her pregnancy in an Instagram post — but fans are still confused about one thing. When is Kylie going to make her announcement?

I know — can the world not focus on sweet Khloé and her adorable announcement for just one moment? Of course you can. OK, moment's over. The thing is, the Kardashian-Jenner family is known for doing major things together. Huge Christmas card collaborations, huge family vacations, a giant brand of a reality show — I mean, maybe you've heard of these things. After waiting so long for confirmation from both Khloé and Kylie, it seems like this sweet Instagram post of Khloé's should've been immediately followed by a similar one from Kylie. If you'll remember, their pregnancies were leaked by a source just a week apart, according to TMZ. At the time, the world pretty much knew that both Kim, Kylie, and Khloé were expecting babies, even though no one had officially confirmed.

So after months of being super sneaky and months of fans digging for clues in every single Instagram post or picture of Khloé, it stands to reason that people are even more confused about Kylie's supposed pregnancy. Surely if the rumors were true about Khloé, Kylie would announce around the same time, too. I mean, what's there to hide at this point?

Let's be honest — if the pregnancies hadn't been leaked so close together (and then hidden so carefully), nobody would be so hyper focused on another sister's announcement. It's not like we heard Khloé Kardashian was pregnant months ago and are just now getting some more news. We heard Kylie was pregnant first, followed by Khloé, followed by an announcement confirming that Kim was expecting her third baby via surrogate, followed by weeks and weeks of speculation. We all scrutinized the Christmas card, checking for any possible bump action happening with Khloe (while Kylie was suspiciously absent). We listened when fans argued that Khloé had surely photoshopped a recent Instagram picture that didn't really show off any kind of baby bump. And then? Then we started digging for clues in both Kylie and Khloe's Instagram posts.

It makes sense that we would be curious about Kylie's announcement following her sister's, but it also doesn't help that Kylie has been much more silent than her big sister. Her Twitter feed hasn't seen a lot of action and digging for clues through her Snapchats, like wondering if her blue iPhone case is a baby sex reveal, is about as much detective work as the world can get. Now with Khloé's announcement, fans are eagerly waiting for Kylie to shout her big news from the rooftop. Will she do it with a limited edition Kylie Lip Kit? Will she wait a few weeks so she can get her own spotlight? Will she simply have a baby and debut him or her on next year's Kardashian premiere? Look, this family is nothing if not an entertainment machine — they know what sells and they know what their fans want. It makes sense they'd space out some big announcements.

But if they really knew what we all wanted, Kylie would pull up Instagram to snap the perfect shot of her baby bump right now. In the kind-of words of Kanye, Kardashian-Jenner Brother-In-Law Extraordinaire, "Khloé, I'm really happy for you, but Kylie needs to have the best reveal of all time." OK, maybe not the best. But hey, we're waiting, sister.