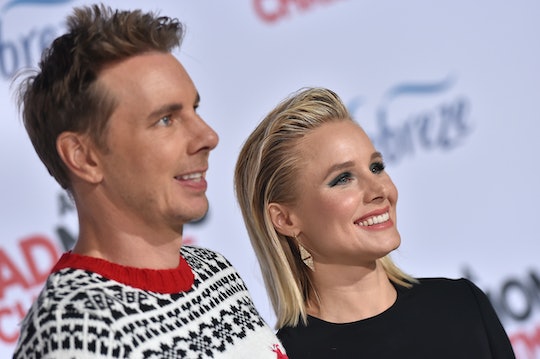 It's been roughly a month since they revealed that their 5-year-old daughter was still wearing overnight diapers, but Kristen Bell and Dax Shepard revealed a potty training trick in a recent interview that could change that for good.

"You know what we have to do?" Bell told Today's Parent in a recent interview over Zoom. "We wake her up at about 11 p.m. when she's like a zombie and put her on the toilet."

"Yeah, we put a wet spaghetti noodle on the toilet once a night," Shepard added.

As Romper has previously reported, Bell opened up about the markedly different experiences she's had potty training her two kids, 7-year-old Lincoln and 5-year-old Delta in a May episode of her web series Momsplaining. While Lincoln had easily taken to using the toilet at 21 months, Delta's journey was a little different. In fact, Bell said her daughter was "still in diapers" at 5 and a half.

When the mom-shamers quickly attempted to tear down Bell's parenting, the actress clarified that Delta was only wearing diapers at night and, you know what, she wasn't too concerned about it. "It's ok, I promise," she tweeted. "The article was looking for sensation, and everyone fell for it as they so often do. They left out that she's only in diapers at night, which is pretty normal for a 5 yr old who's tiny bladder cant take the 10 hr challenge yet."

As What To Expect explained, Bell's potty training dilemma isn't unique. While a child might be able to master day-time potty training, they're not always "developmentally ready to wake up when they sense that their bladder is full or hold their urine for 10 or 12 hours." In fact, the ability to hold it for the entire night or wake up when they feel the need to pee might not happen until age 7. "Most children's systems don't mature enough to stay dry all night until at least age 5, 6 or even 7," What To Expect noted. "Bed wetting through age 7 is considered normal and not a problem to worry about."

Bell told Today's Parent she wasn't "interested" in the mom-shaming that had occurred on Twitter in the last month. "I kept responding with the same thing: 'Every child is different,' which they are. And yes, I have a 5-and-a-half-year-old who still sometimes wets the bed and that's OK! But she’s getting there."

And while some may balk at the idea of a 5-year-old still wearing overnight diapers, Bell and Shepard have stressed that potty training looks different for every kid and parents shouldn't feel ashamed if their child doesn't take to it with the same ease that some other children do. "I think it's really normal and no one should feel ashamed if their kid has an irregular pattern for potty training," Bell told Today's Parent. "And if you want to try this 11 o'clock make-them-pee trick, great, there's no shame in any of it."