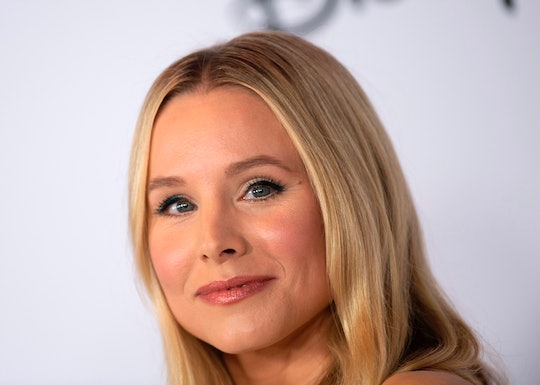 Do mom-shamers ever sleep? I don't think so. Fortunately, though, Kristen Bell shut down someone trying to mom-shame her about her recent admission that her 5-year-old wears diapers just perfectly.

In case you missed it, during a new episode of her web series Momsplaining, The Good Place actor chatted about everyday parenting struggles, like potty training, with fellow celeb moms Maya Rudolph and Casey Wilson. Bell admitted that she had a pretty easy time potty training her oldest daughter, 7-year-old Lincoln. "My oldest daughter, at 21 months, we merely suggested that she use the toilet in the other room and never wore another diaper beyond that," she said. As for her youngest daughter, Delta? "Currently, my youngest is 5½; still in diapers," Bell said.

It seems there were some people who missed the whole point of Bell's Momsplaining episode about not judging other moms, which was aptly titled "Never Judge a Mom by Her Sh*t." There were some negative comments on Twitter about her admission, including a since-deleted tweet, according to O Magazine, from a social media user who wrote, "Why would @KristenBell relate this humiliating fact about her child, along with identifying details like her name?"

"I also dont think its humiliating if ur kid wears diapers late," Bell replied. "Everyone is different. My 5yr old wouldn't be embarrassed even if she was in diapers during the day! She's confident & goofy & doesn't see anything about her beautiful unique self something to apologize for. Xo"

Bell went on to note that Delta only wears diapers at night because her "tiny bladder cant take the 10 hr challenge yet."

In response to another Twitter user who wrote, "Well yeah, she's 5. What about when she's 14?" Bell responded:

Dont you worry, she won't sleep in diapers at 14 :) Her small bladder has a hard time making it through a 10 hr sleep. Its so interesting to me that you're all paying attention to and commenting on such a non issue in my family.

Other social media users were quick to defend Bell and shared their appreciation for her candidness.

"My 9-year-old sister still sleeps in diapers and isnt embarrassed one bit, she just needs that extra protection to keep from wetting the bed like most kids. I'm sure delta is the same way. people should care about how you raise your kids, I think you're doing just fine."

Another shared a story about her own struggles with toilet training as a child, "I come from generations of bedwetters. Consistently into grade school, intermittently into jr high. As a small kid, I fit in diapers at night until school age (no Goodnights pullups then). No shame!"

Of course, Bell shouldn't have to defend her daughter or her parenting, but she did it beautifully by reminding people that there's no shame in wearing a diaper as a 5-year-old and every child is different.

More Like This
Ryan Reynolds Was Asked If He's Excited To Be A Dad Of 4 & Obviously Cracked A Joke
Meena Harris’ New Children’s Book Tells ‘The Truth About Mrs. Claus’
20 Of The Best Christmas Movies For Kids
How Old Should Kids Be Before They Watch The 'Christmas Story' Sequel?