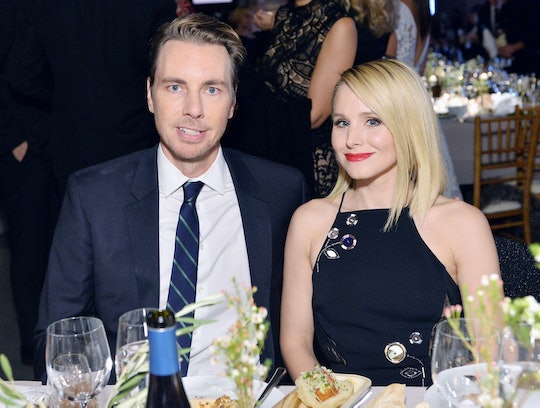 During a new interview on the Say Yes! With Carla Hall podcast, Kristen Bell revealed her daughters drank O'Doul's during Zoom class. But before you go ahead and judge, the Good Place actress prefaced her story by saying that she's not really interested in people calling her a bad parent or whatever and explained why she didn't panic when she found her girls sipping on their father's nonalcoholic beers.

Bell and her husband Dax Shepard are parents to 7-year-old daughter Lincoln and 5-year-old daughter Delta, and while the couple are very private about sharing photos of their kids, they're great at telling stories about them. Maybe because their daughters sound like pretty interesting little people to have around. Particularly during homeschooling, apparently.

When Bell sat down for an interview for the Say Yes! With Carla Hall podcast recently, Hall asked the mom of two "what's the funniest thing your kids have said or done this week?" Bell was ready with a response since the incident had happened that morning, but not before sharing a quick disclaimer.

"Listen. I'm gonna get a lot of flak for this. And let me start by saying, I don't care," Bell said. "You're allowed to give me any advice you want. Any of these listeners, you're welcome to tell me I'm a terrible parent. I don't care. I'm a great parent. I'm learning every day."

And with that warning, she launched into a tale of finding her daughters drinking O'Doul's during their Zoom class. Bell explained that her husband brought home a six pack of nonalcoholic O'Doul's and her daughters "often ask for O'Doul's," even when they're in restaurants. According to Bell, Shepard, who has been sober for 16 years, used to drink O'Douls while carrying their oldest daughter in the Baby Bjorn as an infant, so the kids see the drink as "sentimental."

"So this morning," Bell went on, "I sent them in on their Zooms and they have 15 minute breaks where they're allowed to jump around and grab a snack and wiggle it out, and I walk in to check on them at 9:30 and both of them are drinking an O'Doul's on their Zooms."

While O'Doul's has less than 0.5% alcohol per volume, as per the Anheuser Busch website, Bell found herself momentarily wondering what the other parents and teacher might think of her before remembering she didn't care. "They're both just sipping their Doulies. And I'm like, 'What must these other parents and teachers think of me?'" Bell told Hall. "And then I remind myself, 'You don't care, Kristen. They can pretend like you're doing something wrong.' I would argue that I'm not, because it's nonalcoholic."

Bell and Shepard have raised their daughters to be aware of the importance of Shepard's sobriety, as evidenced by the cards they recently made for him celebrating his 16th sobriety birthday on Sept. 1. "Happy Sobriety Birthday Dady," the homemade card read.