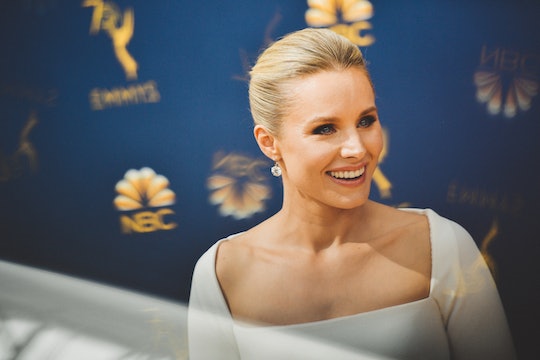 If Your Toddler Likes To Touch Everything In Sight, Kristen Bell Has Some Simple Advice For You

My toddler loves to touch everything — and I mean everything. The words "please put that down" escapes my mouth at least a dozen times a day. OK, that's an exaggeration, but I often find myself on edge because my son likes to get his hands on things that are breakable and potentially dangerous. But Kristen Bell's parenting tip for curious toddlers may change my entire approach to reining in my kiddo's inquisitive fingers.

To be clear, I love that my toddler is curious about the world around him. I want him to explore and make his own discoveries. But my son is like me — clumsy, which means things often break. And as much as I love his imagination, I don't need him breaking my laptop because I need it for work, and don't have a spare.

Which brings me to Bell's parenting tip. During a Baby2Baby event last week, the 38-year-old actor recalled the biggest parenting tip she received when she first became a mom, according to People: Use the one-finger rule. What's the one-finger rule, you ask? It's a way to keep the items around your house in tact while also nurturing your child's curiosity.

My toddler is incredibly destructive and wants to touch everything. One mom told me, "Let her touch things with one finger. That way it’s exciting for her."

So how does the one-finger rule work in practice? Pretty easy, if you ask Bell. "So if she wants to touch a vase that I know she shouldn’t, I say, 'Oh, I want to touch it too. Let’s use one finger! ... It makes them feel like they have a little bit of a choice," the mom of two daughters told People.

How absolutely genius is that?

What I like about the one-finger rule especially is its inherent compromise. It doesn't shut down your child's curiosity — and, in fact, actually encourages it — while also making sure you, as the parent, can exercise some control over what they're touching. This way, you don't have to worry about dropping another grand on a laptop you need in order to make a living.

But it's not surprising that Bell would have this parenting hack in her back pocket. The Good Place star is a well of advice that has undoubtedly saved the behinds of many moms and dads out there.

In April, for instance, Bell — who is mom to 3-year-old Delta and 5-year-old Lincoln with husband Dax Shepard — shared a brilliant tip on how to get your kid to eat that broccoli that they like to throw on the floor instead of their mouth. And it's so simple, you'll kick yourself for not thinking of it yourself.

Bell broke down the hack in three easy steps in a series of Instagram Stories, according to Working Mother. First, you steam the broccoli. Next, you add a bit of salt and some crushed pretzels. Then, you toss in parmesan cheese. "Game over. Everyone will eat it. It's delicious," Bell said in one of her Instagram Story videos, as Working Mother reported. (I highly suspect my son won't, but I appreciate this advice nonetheless.)

Not all of her hacks are easy — or without controversy — though. Bell explained back in March that her daughter, Delta, had experienced sleep troubles, Parents reported, so to address the issue, she and Shepard switched around the doorknob to her bedroom door, and locked it from the outside. Bell told press during a red carpet event that month, according to Parents:

[W]e stand outside and say, "We love you, we will talk to you in the morning, but now, it's time for sleep." And after about 10 minutes, she'll wind herself down. And then, before we go to bed, obviously, we unlock it.

The doorknob switch was a temporary fix, and one that may be a cause for debate among parents. But some parenting experts say that Bell's trick can gives the kid a chance to work the issue out on their own while their parents give them support, according to Parents.

It's cliché to write, but parenting is hard, and navigating your child's ever-changing likes and dislikes is even harder. Thank the heavens we have Kristen Bell to make it a little bit easier.