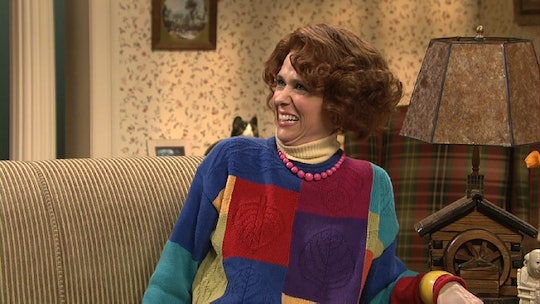 It took Saturday Night Live until the final sketch of the night, but Kristen Wiig's Sue returned to SNL for a sketch to make fans cry from laughter while remembering how much they missed Wiig on the show. It doesn't necessarily take the return of a favorite Wiig character to have to remember that, but most fans had hoped for the return of many of her signature characters from her time on the SNL cast. Sue is a character known for being super excited and anxious about pretty much everything and SNL's return of Sue Saturday night was pretty much everything.

She was back in full force, 90's block sweater and all, and commanding the attention in the sketch because that's not only what Sue does, but that's what Wiig does, as an SNL alum. In the sketch, Aunt Sue was part of a big surprise that her nephew was coming home for Thanksgiving, but she had to get through the sketch with the knowledge of this huge secret that weighed on her so heavily that she shoved her head inside of a turkey and ate an entire pillow. So yeah, pretty much what you'd expect from her.

And Twitter freaked out over Sue's return to SNL.

Seeing Sue's return to SNL was a total surprise, given that the episode until that point had featured none of Wiig's past popular characters. And while viewers might have preferred to have had more sketches with Wiig's characters, Sue was more than enough.

Fans might have expected a lot more throwbacks to all of Wiig's characters on SNL, but waiting the entire episode for the return of Sue was kind of worth it. Wiig stepped back into the role of a favorite character like nothing ever changed and you have to love her for it.