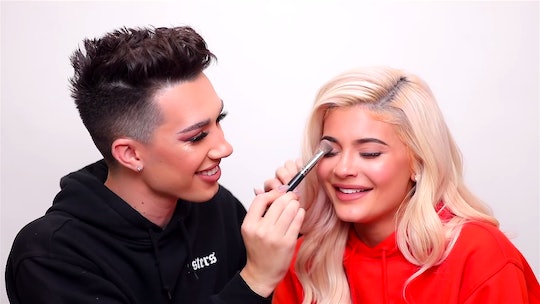 Just like her sisters, Kylie Jenner opted to give her child a unique name. Jenner gave birth to baby Stormi Webster back in February, and she has shared a few anecdotes about the one-of-a-kind moniker on multiple occasions. But in a recent YouTube video, Kylie Jenner revealed that the spelling of Stormi's name changed shortly after her baby girl arrived.

On Tuesday, makeup artist and CoverGirl James Charles, 19, shared a collaboration video with Jenner, 21, on YouTube, Teen Vogue reported. In the video, Charles transformed Jenner into a spooky skeleton using makeup from the new Kylie Cosmetics Halloween Collection. After Charles complimented the name Stormi, Jenner launched into the story of how the name came about.

"Travis thinks that he thought of Stormi ... it was me. I remember the whole thing, but he swears that he made her name up," she told Charles, speaking about her boyfriend Travis Scott. "I was just looking at nature names, like weather- and earth-inspired," she continued. Jenner said she considered the name Willow, but then she came across the name Storm. "Anyway, Storm was on there — just Storm. And then I was like, I kinda want an '-ie' like me, so then I did Stormie "-ie.'" Kylie and Stormie do look pretty cute together, you must admit.

Jenner really committed to the name choice, even investing in custom items with the "-ie" version of the name. As Charles continued applying Jenner's makeup, she explained:

It was always Stormie with "-ie." I mean I bought custom things for her that said her name, "-ie." I bought her the blocks, Stormie, "-ie." And then, I didn't fully choose her name, I wanted to have a week of just me and her to see if I wanted to change it. 'Cause I had one other name in mind, but Stormi always felt like her name from when she was in the womb. It's almost like she chose her name.

So if Jenner was so attached to the whole "-ie" thing, what changed? She continued:

Luckily, Stormi's dad Travis Scott was totally on board with the abrupt removal of the letter "e." "He was like, 'that's cool,'" Jenner told Charles, of the super casual moment she called to tell Scott.

Jenner also further elaborated on how passionate she is about mothehood in the YouTube interview with Charles. "I really feel like this is what I always was meant to do," Jenner told him, when he asked her how she felt about being a mother. "I felt like it was just a part of my life that I was craving. I don't feel like a different person, I just look at life a little differently."

And this past August, Jenner echoed that sentiment in a video for Vogue Australia. “I think more of the future. I used to live each day as it came, and now I look at the future more," she said in the video, when reflecting on the ways Stormi has changed her life, Us Weekly reported. "I actually feel like I love myself more after I had Stormi."

And when Charles asked Jenner if she wanted to have more kids, she didn't hesitate in her answer. "I do want to have more, but when is the question," Jenner told the young makeup artist. "Sisters only," she added with a laugh, when he asked if she wanted boys or girls. "I want seven girls, and then like maybe I'll consider a boy."

By the end of the 20-minute interview with Charles, Jenner's face had been fully transformed into a skeleton. Between the skeletal makeup look and the name Stormi, it sounds like the Jenner-Webster family is all ready Halloween.