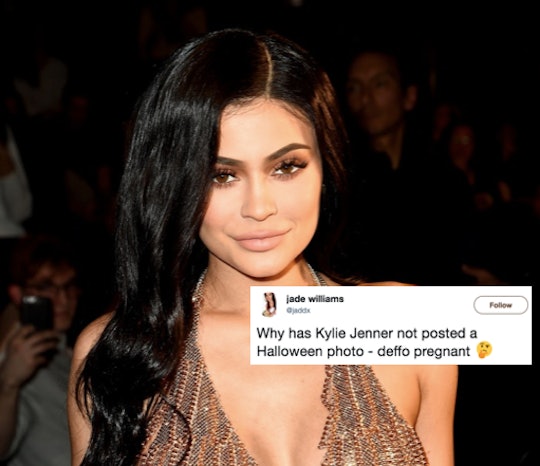 Throughout the course of Halloween weekend, Kourtney and Kim Kardashian took to social media and various clubs around Los Angeles to flaunt their amazing costumes. Kim pulled off a few iconic looks (Madonna, Cher, Aaliyah) while Kourtney did her best Michael Jackson impression circa 1991. As for Khloé Kardashian and Kendall Jenner, they also shared their costumes with fans — Khloé went as Game of Thrones' Khaleesi and Kendall got creative with a disco ball-inspired get up. Given all the fanfare surrounding the Kardashian ladies' costumes, it's only natural that fans are speculating why Kylie Jenner hasn't dressed up for Halloween — in fact, the internet is downright suspicious about Jenner's silence on social media confirms those pregnancy rumors.

Update: Jenner did post multiple Instagrams of her Halloween costume late Tuesday night. Some fans used the comments to speculate if Jenner showing the top half of her costume was a hint that she could be hiding her pregnancy. Of course, Jenner is allowed to show or not show as much of her body as much as she'd like, no matter the reason.

Earlier: Ever since the news broke in September that Jenner might be pregnant with Travis Scott's baby (friendly reminder that neither Jenner or her camp has confirmed or addressed anything), fans have been paying close attention to her every move. So, it came as no surprise on Tuesday when the internet started to question why Jenner had not shared anything about her Halloween costume or Halloween in general. As any super fan of Jenner knows, the star loves to dress up for the occasion and she typically decks out her house with a ton of spooky decorations. This year, however, Jenner hasn't posted anything about Halloween and instead she shared a promo for her makeup line, Kylie Cosmetics.

So, what's going here? According to the internet, Jenner is trying to keep her alleged pregnancy on the DL. Take a look at the conspiracies below:

If Jenner is pregnant, these are pretty solid theories. It makes sense that Jenner would want to keep her supposed pregnancy under wraps, and she 100 percent deserves that privacy. Not to mention, didn't she say that she'd decrease her social media presence once she became a mom? Jenner said in August 2016, according to People:

Once I have a kid I’m not going to be on Instagram. You know, I’ll probably delete my Instagram and just … I don’t know, live life.

Also, it's totally possible that Jenner felt too overwhelmed to come up with a costume this year if the pregnancy rumors are in fact true. Not every parent-to-be wants to dress up or decorate their bump, and this is perfectly OK. Plus, Jenner has gifted fans with many elaborate costumes throughout the years — remember when she dressed up as Christina Aguilera in 2016? That homage might have been Jenner's best costume yet.

On the other hand, there's a chance Jenner might not be hiding anything. It's more than plausible that Jenner simply chose not to share her costume this year or that she didn't dress up at all. There's no shame in blowing off your friend's costume party and watching Hocus Pocus alone instead, people.

No matter what the reason may be for Jenner's lack of Halloween pics, fans are still holding out hope that Jenner will either confirm or deny the pregnancy rumors:

Although fans are clearly itching to know what's going on with all these pregnancy rumors, it's unlikely that she'll speak out anytime soon. If Jenner didn't release a statement in the days following the initial news, why would she speak out now?

For the time being, it looks like Jenner will keep fans guessing with snaps and photos that obscure her stomach. Either way, every expectant parent deserves their space and, should these rumors be true, Jenner is no exception to this — even if fans are dying to see how she celebrated Halloween 2017.