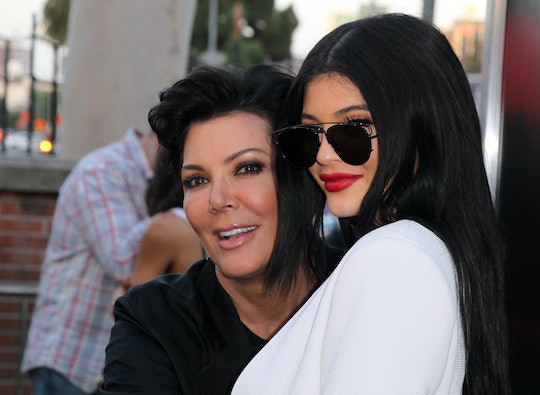 Kylie Jenner *Might* Be Launching A Maternity Line, Because Obviously

It's become increasingly obvious in recent days that the Kardashian/Jenner clan are marketing geniuses. I mean, hate them, love them, whatever... there's no denying that these women know how to keep themselves kitted out in hair extensions and butt-hugging jeans. So after the tenth anniversary of Keeping Up With The Kardashians aired on Sunday, how did the family celebrate? Reports of two pregnancies, specifically Kylie Jenner and Khloe Kardashian. Both are unverified at present, but presumably true for the sake of excitement. And now, there's news that Kylie Jenner might launch a maternity line. Why? Because these ladies know how to finesse their fans, obviously.

It's not even been an entire week since TMZ broke the news that Kylie Jenner, the youngest of the sisters, was reportedly expecting a baby with rapper boyfriend Travis Scott. Romper has reached out to representatives for both Jenner and Scott, but has not heard back at this time. A source close to the couple confirmed the news with People, saying:

They started telling friends a few weeks ago. The family has known for quite some time. She is really excited and so is Travis.

People also reported that the Life of Kylie star is five months pregnant and expecting a daughter.

So how did Jenner manage to hide her pregnancy for five months, especially considering her high profile on social media and constant attention from the paparazzi?

She reportedly posted older pictures of herself on Instagram and hid behind baggy sweatpants and over-sized t-shirts. This is hardly up to the usual level of Kardashian/Jenner style... so perhaps a maternity line would be an excellent idea.

According to The Sun, Jenner and her momager, Kris Jenner, are considering creating a fashionable maternity line for younger moms. A source close to the family told the media outlet:

Kris is so happy for Kylie — not only will she be a grandma again, but it's a whole new set of business opportunities for her. She's thinking maternity fashion for younger mums, and she's already offering to set up meetings. If Kylie embraced the young mummy market, she could take it over.

Now before anyone starts dreaming up possible maternity looks they might expect from the uber-chic young makeup maven, remember the maternity line is only a rumor at this point. As is her pregnancy, technically. But let's get real; if Jenner did decide to create a maternity line, chances are it would be amazing. Her Kylie Cosmetics line has pulled in over $420 million in 18 months, according to Woman's Wear Daily. And if her mom is on board, you better believe s**t will get done.

Bare minimum, it seems a maternity line by Jenner and her mom would have at least one devoted fan; sister Khloe Kardashian. Just days after news broke about Jenner's reported pregnancy, multiple sources confirmed that the Revenge Body host is also expecting her first child with Canadian basketball player Tristan Thompson.

People magazine reported that the couple, who have been together since meeting on a blind date in September 2016, are expecting their first child together. Romper has also reached out to Kardashian's representative for comment, but has not heard back at this time.

A source told the media outlet:

Of course, these two latest pregnancy announcements came after Kim Kardashian-West announced that she and husband, rapper Kanye West, are expecting their third child via surrogate in February. Which, coincidentally, is reportedly around the same time both of her sisters are due to give birth, according to Metro.

If Jenner and her mom are indeed planning on launching a maternity line, they might want to get going. Time seems to be running out.