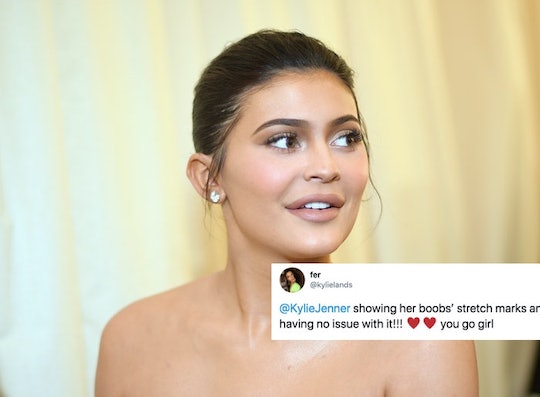 Following celebrities on Instagram can feel very filtered, glamorous, and not entirely relatable. But a recent post from Kylie Jenner that showed her stretch marks was refreshing to see for many women and fellow moms.

On Monday, the Kylie Cosmetics mogul and mother of little Stormi Webster shared a short video of herself on her Instagram Story getting ready for a nice swim. While Jenner is normally pretty slick with her photoshoots, usually with her makeup done and looking almost preternaturally perfect, this time things were a little different. Of course, Jenner, who gave birth to her daughter Stormi in February 2018, looked beautiful in the post, which also featured her using a butterfly filter. But she also casually shared an element of regular human growth and motherhood so many women recognize: faint stretch marks on her breasts.

The Keeping Up With the Kardashians star could have presumably filtered them out if she chose or filmed at a different angle, but she didn't and posed in her bikini top on a sunny day with her stretch marks on display.

Many people on Twitter and Instagram were quick to praise Jenner for not filtering them out of the photo. "@kyliejenner showing her boobs’ stretch marks and having no issue with it!!! you go girl," one fan tweeted.

"I finally like a normal human after seeing that @KylieJenner also has boob stretch marks!" another fan wrote on Twitter.

Another wrote that she appreciated the realness of Jenner's post: "Kylie showing her stretch marks on IG stories. That’s a nice change for the Kardashian/Jenner family."

"Just when I thought you [were] too perfect," one more commented on Instagram. "Now we get to recognize you... embrace that motherhood."

While some fans might have been surprised to see Jenner sharing a photo that showed her stretch marks, she's previously opened up about embracing and loving her postpartum body. In fact, during an "Ask Me Anything" on Instagram back in October 2019, Jenner shared that she had stretch marks on her "breasts, butt, and thighs" since welcoming Stormi in February 2018 and has no plans to get rid of them, as Parade reported. "I haven’t gotten rid of them, [I’ve] just accepted them as a little gift from Stormi," she wrote at the time.

And for anyone who wants to say something negative about Jenner's stretch marks or postpartum body in general, don't bother please. When someone commented in April that she looked "better" before being a mom, as ELLE reported, she simply noted on Instagram "I birthed a baby," and let that be the end of it.

Stretch marks are so common in so many people, not just women who have given birth. They happen in puberty to plenty of girls and boys as their bodies grow. So there really should not be any shame around them. Every woman has to make her own decisions about her postpartum body, of course, but the fact that a celebrity like Kylie Jenner is open about her own stretch marks could help some moms be more more comfortable with theirs.