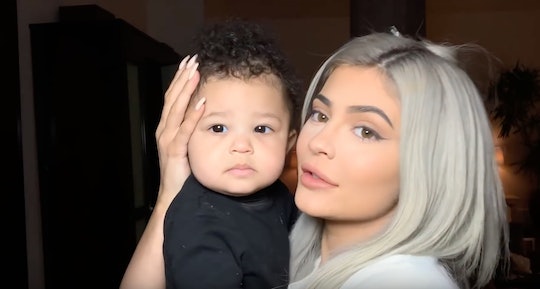 Kylie Jenner and Travis Scott have everything they could ever need — especially after welcoming their super cute 1-year-old daughter, Stormi Webster, into the world last year. So, it was probably extremely hard for the mother daughter duo to shop for Scott's upcoming birthday. But they seemed to have found the perfect present for him. Their fans living in Los Angeles, California will be able to see (with their own eyes) that Kylie Jenner and Stormi's birthday present to Travis Scott is the perfect present for him — it's beyond life size (just like the rapper's personality).

Finding the perfect birthday present for anyone is hard. It's not easy to shop for a person (like Scott) who can buy anything they want and need at a moment's notice. But the best birthday presents come from the heart, and Jenner certainly put all of her heart into her boyfriend's birthday present. She reportedly paid for a billboard to be put up in West Hollywood with photos of her and Stormi on it, in honor of Scott's 28th birthday on April 30, according to Us Weekly. "Happy Birthday Daddy," their message reads. "Love Mommy & Stormi XO"

The best thing about this gift is that anyone can see how much Scott means to Jenner and their little girl. The billboard is located on Santa Monica and La Cienega, according to TMZ, which just so happens to be "one of the busiest intersections" in the neighborhood.

If Scott wasn't aware of how much Jenner loves him, then this birthday gift definitely makes that clear. The billboard is absolutely incredible.

As if there weren't enough things to see in Los Angeles, this billboard is probably going to stop traffic and attract a few visitors. It's not clear how long Jenner's present will be on display. But, since Scott doesn't turn 28 until Tuesday, according to TMZ, it's possible that the billboard will be up until then (fingers crossed).

This birthday is shaping up to be a very special one for Scott — and it hasn't even happened yet. Jenner kicked off the weekend for her boyfriend by throwing him the most epic Avengers: Endgame themed party. Jenner reportedly hosted a private screening of the new film (Scott is a major fan of the super heroes) for his friends and family members at a movie theater, according to E! News. The family of three even dressed up for the occasion, according to Cosmopolitan, putting on their finest Marvel Cinematic Universe themed costumes to show their excitement and once again, proved how cute they are.

The couple also loves giving each other extraordinary birthday presents just as much as they love throwing parties. Scott reportedly bought Jenner a vintage Rolls-Royce car and two Louis Vuitton trunks when she turned 21 last year, according to W. Since both of those presents are incredibly hard to top, it makes sense that Jenner decided to one-up her boyfriend by going for an option that is larger than life for his birthday in 2019.

As if people didn't already know that their family is super adorable, then the majority of people sitting in traffic at this intersection are definitely aware of that now.