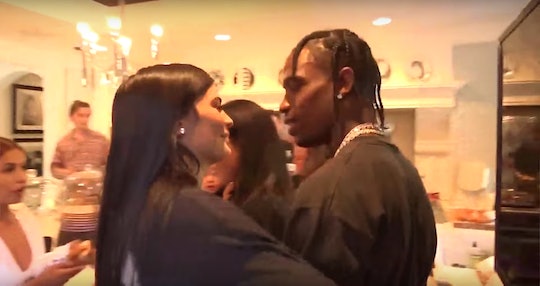 Here's What Kylie & Travis' Body Language In Her Pregnancy Video Means, According To Experts

It's hard to believe only three days have passed since Kylie Jenner announced the birth of her baby girl following her under-the-radar pregnancy. Rumors had been swirling that the youngest KarJenner sister was pregnant since September, but Jenner was determined to keep the news from the public until her baby girl, Stormi, was born. She announced the news with an 11-minute video chronicling her pregnancy and her relationship with boyfriend Travis Scott — the details of which have been extensively analyzed all week. From *clues* about the baby's name to the designer brands in the nursery, fans have not let one second of the mini-documentary slip through the cracks. One particularly interesting element of the pregnancy video is Kylie Jenner and Travis Scott's body language — which experts have interpreted in very different ways.

After all, Jenner, 20 and Scott, 25, were only first spotted together in April 2017 — about 10 months ago, which is only slightly longer than the length of the average pregnancy. Since Jenner gave birth in early February 2018, that would mean she was pregnant for most of the couple's relationship. Romper spoke with well-respected body language expert Dr. Lillian Glass, who thinks the body language between Jenner and Scott in her pregnancy journey video indicates utter doom, as well as leading body language expert in human behavior Susan Constantine, who thinks Jenner and Scott's body language indicates a loving yet dependent relationship.

Here are seven observations these two experts made about the pregnancy journey video, along with their very different analyses.

1. Maybe Jenner Is The "Aggressor," Or Maybe They're Just Intertwined

"When they're holding hands, she's the aggressor there. She's the one rubbing his hand, not vice versa," Dr. Glass tells Romper in a phone call.

However, Constantine sees interactions like this one a little differently. "There is a huge amount of emotional connection between them," Constantine tells Romper over the phone. "They are interconnected like a pretzel is tied together."

2. She Walks Behind Him, But They're Still Making Physical Contact

"He's looking at his cell phone and she's walking in back of him. That's not a good sign," says Dr. Glass. Because of that, she believes, it's not a very good relationship. "He's not paying her any attention. There's too much distance between them," she adds.

When Scott and Jenner hold hands again later in the video, Dr. Glass observed the same sort of body language. "He's two steps ahead of her. It's like he's waking a dog," she tells Romper.

Constantine doesn't see the couple's walking style the same way. "She was behind him, but they were still connected," she says, of the moment when the couple goofily climb up a set of stairs together. "They're playful and they're having fun."

3. He Doesn't Always Reciprocate Her Acts Of Touch — But That Doesn't Mean He Doesn't Enjoy Them

In another scene, Jenner and Scott are seen cuddling on a couch as she plays with his hair. "She's the aggressor again. She's picking at him, she puts her head on him. He doesn't make a move towards her," Dr. Glass says.

Constantine doesn't see Scott's passiveness as a problem in this moment. "When they're laying down, and he's facing her — this is sweet love and affection," Constantine tells Romper. "She's twisting his hair. And he's obviously enjoying being petted."

Dr. Glass also noticed Scott distancing himself in the above hug. "She's the one that hugs him, he doesn't come after her," she says. "She engulfs him, he's just standing there."

"This is not a good sign. She's leaning away. His arms are crossed, so he's alienated from her. And there's too much distance between them. It's not like they're a loving couple here," says Dr. Glass. This moment, she believes, is a red flag. "It's a terrible relationship."

5. The Strength Of Their Connection Is Up In The Air

"Here they are hugging each other but there's no connection," says Dr. Glass. "He grabs her arm like you'd grab a friend's arm."

Constantine does not notice the same distance when the couple embraces, noting that throughout the video, there are multiple moments where the two of them could not resist touching each other or at least standing near each other, and even moments where they collapse into each other's bodies.

6. His Involvement At Her Ultrasound Can Be Interpreted In Two Ways

Constantine looks at this scene in an entirely different way. "He was off to the side. When mama bear comes in, he knows his place," she tells Romper. "He's also a gentlemen, so he backs up and allows mom to have time with mother and daughter."

7. The Relationship May Be Detrimental — But For Different Reasons, The Experts Say

"The bottom line is it's a bad relationship. They're disconnected," concludes Dr. Glass. She adds that Jenner and Scott seem like strangers, and that their relationship feels contrived. "It's a very bad relationship. There's no love there. You don't feel any connection between them. And the one's that's gonna suffer is the child."

Even though Constantine sees a lot more love in the relationship than Glass sees, she thinks that their apparent dependence on each other could be detrimental and toxic in the long run. She explains:

There is danger in this connection where the two of them are almost breathing in the same air, at the same time ... meaning that they are so connected on a deep cellular level, that without one another's existence, the other one is going to have to master separation anxiety, because they are not independent and strong on their own.

Constantine also adds that the study of body language is not an exact science, and that it's subjective to bias. While hearing an analysis from these body language experts is certainly telling, the only people who really know what Kylie Jenner and Travis Scott's relationship is like is the two of them. And possibly baby Stormi.