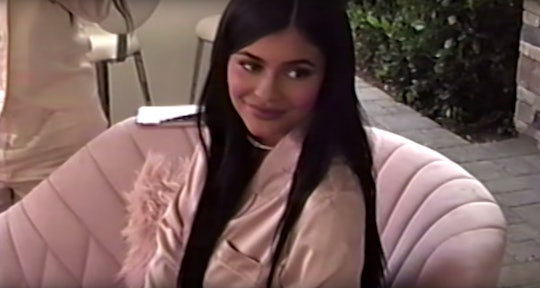 When Kylie Jenner announced yesterday that she had a baby and also shared a touching video on YouTube, people all over the world took notice of her one-of-a-kind baby shower. Strategizing how to recreate Kylie Jenner's baby shower is probably top of mind for many moms-to-be and their friends. Hey, if people take wedding, birthday, and other party cues from the stars, why not baby showers too?

Although Kylie is widely recognized for her work as a reality star, model, and makeup icon, widely recognized for her always perfectly put together look, Kylie's baby shower was all kinds of comfy and (as far as the Kardashians are concerned) rather laid-back. I mean, she and her guests all rolled up in matching pink pajamas, so how much more cozy can you get? It looks like the famous family enjoyed a pretty typical baby shower, too, in that it involved crafts, cute drinks, snacks, and lots of adorable decor. Kylie's shower, though, was taken up a level in some respects with over-the-top floral arrangements and dessert trays. You can work this same luxe vibe into any shower you happen to be hosting (without breaking the bank in the process).

Kylie's pregnancy was never officially announced, though it was widely speculated that she was going to have a baby girl, and she proved these rumors true with her heartfelt video that wasn't released until a few days after her baby daughter was born. Underneath the flowers and lavish decor, it looks like the baby shower was a sincere celebration of the child to come, and there's no doubt this baby will be so loved.

If you're expecting, or know someone who is, here's how you can recreate Kylie Jenner's baby shower for your own celebration.