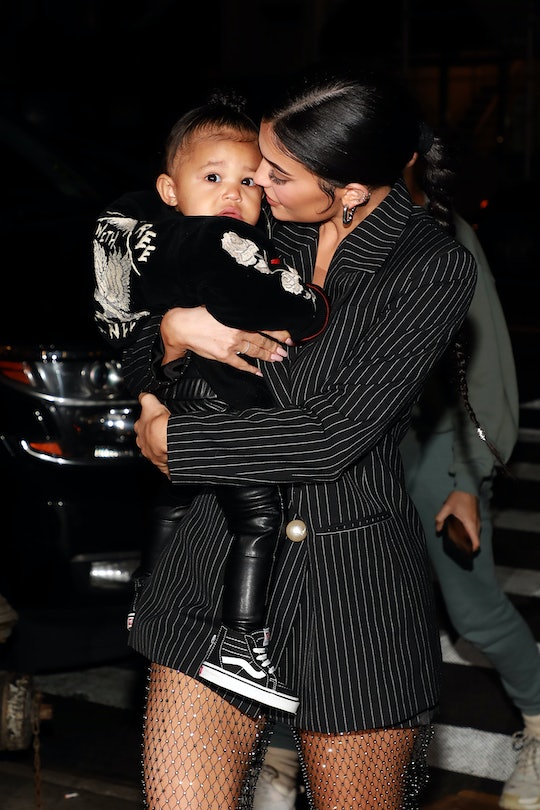 Imagine for a moment what it must be like to have the life of Stormi Webster. When every day of your life is a magnificent whirlwind and each party promises to be better than the next. After Kylie Jenner's butterfly party in honor of Stormi's first makeup collaboration with her mom featured a garden virtually swarming with the winged creatures, even on her dream of a dress, I have no idea how she will top this one. She will, of course, but my imagination simply cannot stretch that far.

The Kylie Cosmetics mogul shared photos from her weekend garden party in celebration of a new makeup collaboration between her and her little girl Stormi. Now it feels worth a mention that Stormi is not yet 2 years old and therefore was perhaps the weak link in the decision-making process for the new Kylie x Stormi collection, which drops on her birthday of Feb. 1.

Still, she certainly looked like she was enjoying herself at the party, which could perhaps also be doing double duty as her birthday party, but somehow I doubt it. Last year for her first birthday, Jenner created a whole Stormi World theme for her daughter, so somehow I think she'll probably have another celebration after her massive butterfly extravaganza.

Jenner dressed in butterfly-patterned white jeans for the party, which featured cut out butterflies in the trees, in the flowers on the table, in the air and even a massive butterfly hedge as well. Little Stormi wore a tulle dress with butterflies sewn into the back and a lacy butterfly top. The kids' table had butterfly-shaped chairs, there were birdcages with pretend butterflies in them, oh and let's not forget the pale purple drink named after Stormi with guess what? Butterflies perched on the edge. If you are someone with Lepidopterophobia (fear of butterflies) this is definitely not the party for you...

Also on hand were Jenner's older sister Khloé Kardashian and her little girl True Thompson, with the toddler wearing a purple tutu dress for the occasion. Oh, and did I mention True totally matched the massive purple ball pit?

Kim Kardashian also shared a video of Rob Kardashian's daughter Dream doing some crafts at the party, which admittedly looked like a blast for kids.

It will be interesting to see how Kylie Jenner and Stormi plan to celebrate her second birthday over the weekend. Because that butterfly party has set the bar awfully high.