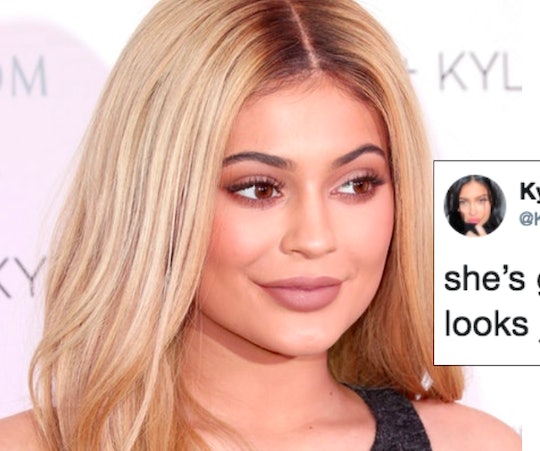 After keeping fans in the dark during her entire pregnancy, Kylie Jenner seems to have grown an affinity for withholding information. Her baby daughter Stormi is nearly three weeks old, and Jenner has hardly given fans any updates about motherhood, Stormi's health, or even lip kits. But on Wednesday, when someone tweeted at Jenner to ask how Stormi was doing, they actually got a response. And Kylie Jenner's update on Stormi is so incredibly sweet and fans are so happy to hear that the baby is doing well.

"How's Stormi?" a Kylie Jenner fan account tweeted at the reality star on Wednesday afternoon. Just four minutes later, Jenner quote-tweeted the question and answered it. "She’s good 😊 still staring at her all day," Jenner responded. "She looks just like me when I was a baby 😊."

It's fantastic to hear that Stormi is doing well — and it's adorable to hear that she resembles her mama. Jenner has only released one photo of Stormi so far (her birth announcement), so hopefully more are on the way.

Within minutes, Jenner's tweet racked up thousands of likes. Whoa, was the reason that she had yet to provide such an update simply that no one had asked her? Is the secret to finding out celebrity scoop just...asking them?

While the only photo that exists of Stormi is a bit obstructed, here it is alongside a baby photo of Jenner for comparison. Do you think they look alike?

Some Simply Commented On How Adorable It Was

Some Fans Are Begging Jenner For Photos, So They Can See The Resemblance For Themselves

And Others Are Fed Up With People Begging Jenner For Pics

And Some Expressed Support For Jenner Keeping Things Private

And Others Asked How Stormi's Father, Travis Scott, Was Doing

Scott has also remained pretty mum on all things Stormi, although he did express his excitement about his new daughter on the day Jenner announced that she had given birth. "2.1.18, 4 ever, New rager in town. !!!" Scott tweeted that day.

And even though the new mother and father are keeping parenthood private at this point, there are a few things we know about Stormi. For starters, Stormi doesn't have a middle name. When Jenner shared the first photo of Stormi on Instagram, she simply captioned it "Stormi Webster."(Webster is Travis Scott's real last name.) Furthermore, according to a copy of Stormi's birth certificate that was obtained by The Sun, the middle name space is blank.

Stormi was born on Thursday, Feb. 1, 2018, at 4:43 p.m — and her father celebrated that specific time in a very big way. According to E! News, Scott sent Jenner 443 roses as a gift to represent the time their daughter was born. Jenner posted a photo of the endless pink and white bouquets on Snapchat.

Jenner's birth announcement video, "To Our Daughter," also gave fans a few clues about what the beginning of Stormi's life might look like. For example, footage of Stormi's nursery shows that she will be very comfortable. Her closet is already stocked with more designer shoes and clothes that most adults have, her nursery is decorated with sweet books including I Love My Mom and Guess How Much I Love You, and her walls are decorated with a pretty butterfly motif.

And speaking of butterflies, some fans are convinced that the name Stormi actually has a little something to do with butterflies. Before Jenner announced her baby's name, many people suspected her name would be something inspired by the insect. It wasn't too wild of a guess, considering Jenner and Scott have matching butterfly tattoos. Anyway, some fans theorized that Jenner chose the name Stormi because storms are caused by a localized change in complex system, a.k.a. the butterfly effect. It's certainly a stretch — but if you want to know if it's true, maybe you should tweet at Jenner herself.