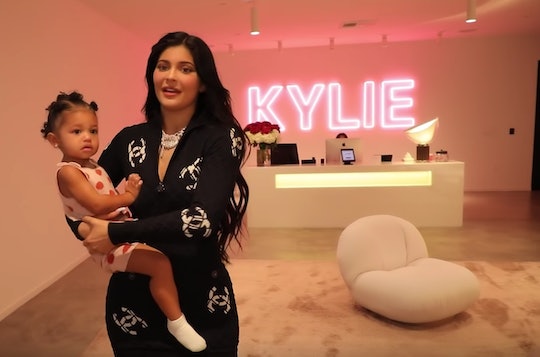 Stormi Saying "Happy!" In The Mirror As She Puts On Lipstick Is Just Too Precious

Well, Kylie Jenner's baby girl has done it again. In an adorable new video, the Kylie Cosmetics founder documented her 1-year-old daughter Stormi putting on lipstick so gosh darn excitedly, you'll easily need to watch it a few dozen times. It's that precious.

On Thursday, Dec. 12, Jenner filmed little Stormi, wearing a black sweatshirt, sitting in front of a mirror clutching onto one of her mom's liquid lipsticks. The toddler is also wearing that same lipstick all over her mouth... and chin... and teeth. But that doesn't seem to phase her one little bit. In the beginning of the video, Stormi takes one look at herself in the mirror and proudly proclaims that she is "happy!" while giggling at the lipstick on her face. Stormi then proceeds to makes faces at herself in the mirror before proudly showing off her handiwork to the camera.

Jenner's Instagram followers really can't get enough of Stormi's adorably expert makeup skills. "I can't omgggggg," one follower commented. "She's for sure your daughter lol. Can't wait for her first glam sesh." Another said, "OMG she is so precious."

It's not surprising that Stormi seems so interested in her mom's makeup; after all, she does spend a lot of time at her mom's office. What's more, she may very well follow in her mom's footsteps one day, as Jenner has previously said that she would like Stormi to take over Kylie Cosmetics one day.

This isn't the first time Stormi has had a little play session with her mom's lipstick. Back in October, Jenner said in a YouTube video that Stormi is already showing an interest in makeup, especially lipstick. "Stormi is actually super into makeup right now, it is amazing," she said. "Every time I'm wearing lipstick, she notices and is like 'Lip, lip, lip!'."

One day, Stormi will likely properly learn how to apply lipstick. In the meantime, though, I think Keeping Up With The Kardashians fans are more than happy to see her put it all over her face. I mean, it makes her so "happy!"

More Like This
Kylie Jenner Reveals That Her Mom Kris Basically Delivered Stormi
Alec & Hilaria Baldwin Welcome Baby #7, And Revealed Her Cheerful Name
Rihanna's First Post Since Giving Birth Confirmed She's Performing At The Super Bowl
Gabrielle Union Admits She May Be Becoming A Bit Of A Dance Mom With 3-Year-Old Kaavia