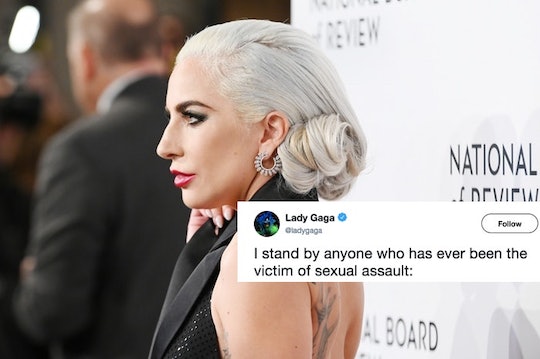 Lady Gaga Breaks Her Silence On Working With R. Kelly In A Powerful Statement

Lady Gaga may be enjoying a real moment in the sun after her remarkable performance in A Star Is Born, but that doesn't mean she's not reflective of her past — specifically, her 2013 collaboration with R. Kelly. It has clearly been on her mind for several reasons, and so she decided to do something about it. On Thursday, Lady Gaga apologized for working with R. Kelly, as CNN reported, and as an advocate for victims of sexual assault her words carry an incredible amount of merit.

Back in 2013, Lady Gaga and R. Kelly collaborated on the song "Do What U Want (With My Body)." At the time, Lady Gaga defended her decision to work with the singer, who had been investigated on child pornography charges in 2008 and was later acquitted, according to USA Today. During a 2013 press conference, as according to CNN, Lady Gaga told reporters: "R. Kelly and I have sometimes very untrue things written about us, so in a way this was a bond between us. That we were able to say, the public, they can have our bodies, but they cannot have our mind or our heart. It was a really natural collaboration."

Romper's request for further comment from Lady Gaga's reps was not immediately returned. Romper has also reached out to R. Kelly's reps for comment, but has not yet heard back.

The two singers put on a controversial performance on Saturday Night Live that year that also drew criticism from fans, according to E! News, especially in the face of Lady Gaga's highly respected work with sexual assault victims.

In the wake of the recent Lifetime documentary Surviving R. Kelly, which features interviews with women who claim the singer used his influence as a performer to allegedly sexually assault and abuse young women, according to The New York Times, many celebrities have spoken out against him. And now Lady Gaga has followed suit.

In a recent Instagram Story and tweet, the singer apologized for her collaboration and explained that she believes her own sexual assault history, which she shared with Vanity Fair in 2015, clouded her judgment, according to People.

"As a victim of sexual assault myself, I made both the song and video at a dark time in my life, my intention was to create something extremely defiant and provocative because I was angry and still hadn’t processed the trauma that had occurred in my own life," she wrote. "The song is called ‘Do What U Want (With My Body)’, I think it’s clear how explicitly twisted my thinking was at the time."

Gaga also made it clear that she supports the women who came forward with their stories. "I stand behind these women 1000%, believe them, know they are suffering and in pain, and feel strongly that their voices should be heard and taken seriously," she wrote. "What I am hearing about the allegations against R Kelly is absolutely horrifying and indefensible." R. Kelly has denied all allegations levied against him in the documentary and is planning to sue those involved, according to People.

With that in mind, she has made the decision to remove the song from all streaming devices, as she explained in her statement: "I intend to remove the song off of iTunes and other streaming platforms and will not be working with him again. I’m sorry, both for my poor judgement when I was young, and for not speaking out sooner. I love you."

Lady Gaga's statement was a beautiful acknowledgment of the stories shared by these brave women, and proof that a sincere apology holds tremendous power in its vulnerability.