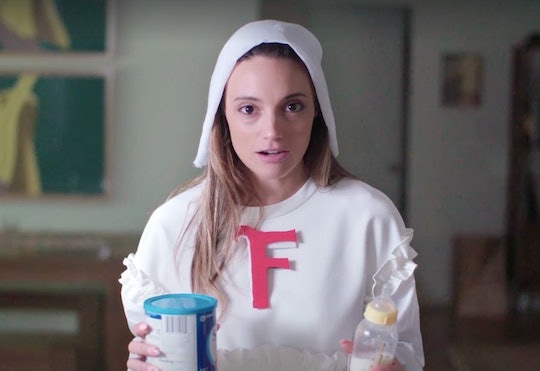 The Mommy Wars are exhausting for a number of reasons. But one of the worst battles that new moms face is the pressure to breastfeed — because while a new parent can understand the benefits of breastfeeding over formula, it's not always possible for some women. That's exactly why Laura Perlongo's breastfeeding video is a must watch for anyone out there still intent on shaming other women for the way they choose, or have to, feed their infants. Sometimes, it's just out of their hands.

The video, produced by ATTN:, is making its way around Facebook and it's worth taking a minute and a half out of your day to understand the stress that #bressure — the pressure to breastfeed — causes mothers. Don't moms already have it hard enough? Yes, they do.

Perlongo starts the video holding her baby, Cleo, and goes through all of the things she tried to up her milk production naturally. You've probably seen or tried some of these yourself: smoothies, teas, breast massages, and even, yes, listening to classical music to encourage your body to produce milk. (This is not a thing.)

Finally, Perlongo says, she gave up and did something that mothers are shamed for: She supplemented with formula. Perlongo likens using formula as the modern equivalent of wearing a scarlet letter, and sadly, she's not wrong. If you spend any time in mommy forums or even just a day with a nit-picky mother-in-law while you're having trouble breastfeeding, it's palpable. More importantly, that sort of shaming is not good for anyone — including kids.

An estimated 15 percent of women have trouble producing enough milk to feed their babies for a number of reasons. Stress is one of them, by the way, so bullying a woman having trouble with it is not exactly helpful. Some women may choose not to breastfeed their babies for other reasons that they might not feel like sharing with the mom-iverse, which aren't "fixable." Those who lay on the "bressure" might be crossing emotional lines they don't even know exist.

For example, the stress of getting an infant refusing to latch compounded with postpartum depression can be life-threatening for some women. A healthy HIV positive woman can have a healthy HIV negative baby but still pass the virus through breastmilk. Some women simply just don't want to use their breasts to feed their children. That's OK. And it has nothing to do with their worth as a mother.

Shaming a woman who cannot breastfeed by reciting the benefits of breastmilk is akin to bullying. There's no need to momsplain something to another woman who is likely doing everything in her power to raise her child the best she can, and who simply can't (or chooses not to) breastfeed.

The benefits of breastmilk are, of course, real. There's less chance of ear infections and allergies and other health bonuses down the road. But if a woman works with her pediatrician and is feeding her infant, what's the point in throwing stones?

Instead of shaming non-breastfeeding moms, women could spend that time advocating for more support for moms having trouble with it. Studies show that women who receive support and training in hospitals just after birth have better results overall with breastfeeding. Advocating for support that helps women who can't breastfeed or are struggling would take things to a whole new and constructive level.

Perlongo and Shulman are right when they say that "bressure" has to stop. Parenting is hard enough as it is.