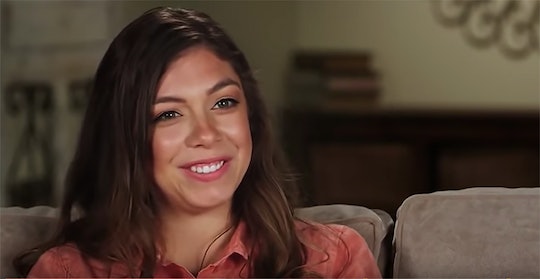 Counting On's Lauren Swanson married Josiah Duggar in June, a move that thrust her into the spotlight at warp speed. It's safe to say Lauren is now well-versed in what it means to be a public figure, especially since she has faced countless pregnancy rumors since saying "I do." In fact, Lauren Duggar pregnancy rumors are making the rounds once again, and this time it's for a pretty interesting reason.

Pregnancy gossip about Lauren first came to light in late August after she shared what many Counting On fans thought was a curious photo of Josiah supposedly glancing in the direction of her stomach area. Many Counting On diehards assumed Josiah's gaze insinuated a pregnancy is on the way, a theory that hasn't been confirmed or denied.

Although one might think the pregnancy speculation would eventually die down (the two got married only three months ago, after all), the chatter ramped up again in a Reddit discussion about which Duggar is most likely to get pregnant next.

Essentially, a few people placed bets on Lauren as the next pregnant Duggar because of her recent Pinterest board pins highlighting baby shower ideas and newborn photography. No one works harder than the Counting On sleuths, right?

"Lauren has been pinning baby stuff on her Pinterest, so she could be pregnant right now," one eagle-eyed commenter on Reddit wrote.

The Pinterest theory likely got people thinking because a few others chimed in with similar thoughts about Lauren.

"We'll probably get a SiRen pregnancy announcement next month," a commenter said about a possible pregnancy for Lauren and Josiah, referencing their unofficial couple name.

"Josiah and Lauren could catch a baby any day now, if they haven’t already," someone else joked, citing Michelle Duggar's curious term to describe conception. "If Jessa isn’t next, it’ll probably be Lauren."

One commenter couldn't help but make a joke about all of the speculation, writing: "I think they’re all perpetually in a state of possibly pregnant."

Of course, it's definitely possible that Lauren pinned the baby ideas for the future or for someone else. It's pretty common for people to pin things — like vacation ideas or food recipes — just because.

Not to mention, one person pointed out that Josiah and Lauren possibly hinted at their pregnancy plans in their wedding video. "They said in their post wedding video that they would take time to get to know each other," the fan argued.

But as much as it is interesting to speculate about whether Josiah and Lauren are expecting, there's a good chance the couple doesn't find the gossip entertaining. These days the two seem more invested in their new marriage as opposed to what people think, a sentiment evidenced by Lauren's birthday message to Josiah on Aug. 28. She wrote on Instagram:

Honey, Where do I start? From the beginning you have always been my best friend.👫 I never knew I could love someone as much as I love you.💗 You are the one who makes me laugh until my stomach hurts, the one who calls me beautiful even when I wake up with crazy bed hair, the one who loves me even when I don’t deserve it, the one who cares for my needs before your own. You push me to do greater and better things, and have always been that encouragement to point me towards Christ! 🙌🏼 God is so kind to have blessed me with such an amazing husband! I love you sweetheart-Happy Birthday!🎈🎂 Forever and always yours❤️😘-Lauren.

Lauren's cute message to Josiah is a nice reminder that the couple deserves to enjoy these first few months of marriage in peace. I'm confident the couple will fill fans in about their baby plans when they're ready.