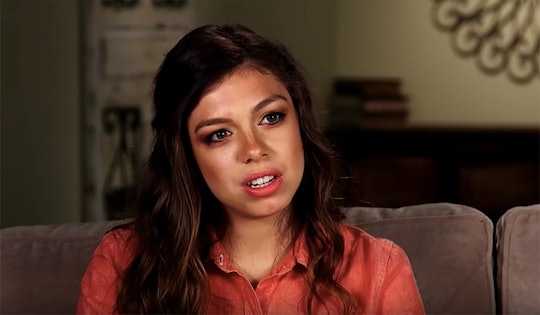 Lauren Duggar Answered Someone Asking If She's Pregnant, But She Shouldn't Have To

Just two months after Lauren Duggar revealed on Counting On that she and her husband, Josiah Duggar, had suffered a heartbreaking miscarriage, a fan asked the reality star whether she's expecting a "rainbow baby." Although the fan likely had no ill intent, Lauren Duggar's response to the pregnancy rumor highlights why people shouldn't ask unsolicited questions about another person's fertility.

Although Lauren is in the public eye, she was under no obligation to speak out about her miscarriage. Still, despite the difficult circumstances, the former Georgia resident opened up about the situation on Counting On in hopes of drawing awareness to how common miscarriages are.

"I was thinking maybe I had something that had gluten in it," she shared during the February episode, according to People. "It was late at night and I went to use the restroom and there was the baby. Gone. I couldn’t believe it and I was hoping it wasn’t true.”

Given the publicity surrounding Lauren's miscarriage, it's understandable that some fans reached out to share their own experiences and messages of support. But what's a tad troubling is the focus on the Counting On star's next possible pregnancy, as evidenced by this Instagram comment from April 18.

"So, I hear you guys are expecting a rainbow baby," a fan wrote, as In Touch Weekly reported. "Congrats..."

Of course, it's important to point out that this fan likely didn't mean to cause any harm with their remark. Although it might seem obvious to others, some people may not be aware that it can be inappropriate and hurtful to ask another person about their fertility.

Lauren responded to the commenter, simply telling them that the news isn't true. “Someone just made that up," she said.

It's unfortunate that Lauren had to address this question, especially if it derived from a rumor. But the silver lining in this situation is that has prompted a discussion about the best ways to approach what can be a sensitive topic, especially when dealing with someone who's living in the public eye.

Another great example of this? Hilaria Baldwin, who requested privacy after revealing in early April that she had suffered a miscarriage. Baldwin's transparency about the situation wasn't an invitation for others to pry into her personal life and future family plans, and the same rule of thumb applies to Lauren. Let people share what they want to share, but let them know you're there for them, too.

It's also OK to feel guilt about sharing your pregnancy news with someone who is struggling with fertility issues. TODAY correspondent Jenna Bush Hager touched on this shortly after she revealed her third pregnancy, noting how it was difficult to tell her co-worker, journalist Hoda Kotb, given her fertility struggles.

The two apparently had a private conversation about the news, in which they openly discussed their feelings. "I don’t take this lightly. I know how blessed and lucky I am. It’s an amazing gift," Hager said about her pregnancy, according to USA Today.

The point is, miscarriage shouldn't be a taboo topic that people shy away from talking about. As Lauren's situation with a fan highlighted, however, there are some questions that aren't appropriate to ask, especially if they started with a rumor.

More Like This
New Report Shows 80% Of Pregnancy-Related Deaths Are Preventable
20 Bridgerton-Inspired Baby Names
Chrissy Teigen & John Legend Are Back On The Red Carpet
What Does Amniotic Fluid Smell Like? A Nurse Explains