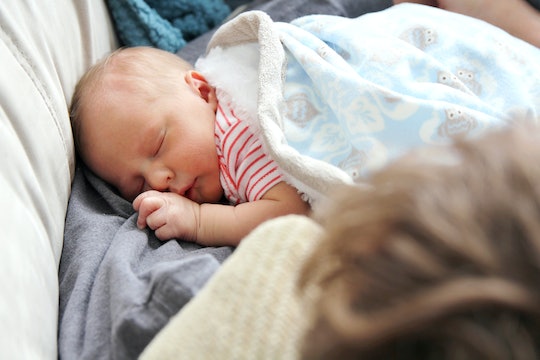 I told tell myself before I started breastfeeding that it might be more difficult than I imagined. But the truth is, despite knowing that, I still went into it with a certain amount of naivety and confidence. I fell prey to the hippie-ish idea that because breastfeeding was natural, it would come naturally to me, and so despite my desire to be the most prepared new mother ever, I only read a little on the subject, and flatly refused to take a breastfeeding class. I had support, in the form of my partner, my midwife, and her team, but I’ll readily admit that learning how to breastfeed my baby was really hard — harder than I’d ever imagined. And not only was it extremely challenging, it was actually one of the hardest things I’ve ever done.

New parents are often told to simply persevere through the difficult parts of breastfeeding. Of course, this advice (like so many things in the parenting world) is way too one-size-fits all, and definitely not right for everyone. Breastfeeding also varies widely from person to person and although some problems may resolve themselves with time and “perseverance,” others may require a higher level of help, or even be unsolvable. In my case, most of what I needed was time, consistent support, and apple juice. Otherwise, I'm not sure what would've happened to my breastfeeding relationship with my son. That thought alone reminds me just how lucky and grateful I am.

After a long labor and an attempted home birth, I ended up in the hospital and had a c-section. When my son was born, I was groggy from the drugs and exhausted from a week of hell. I was so tired and so relieved to finally have my child out of my body that I clung to his tiny swaddled form and didn’t even think about trying to breastfeed. When our midwife came in to check on me, she asked me, “have you tried to feed him yet?” and I was embarrassed to admit that the answer was no. I suddenly worried that the best window to initiate breastfeeding between the two of us might be closing before we’d even had time to begin.

The instinctual magic of of the night before had vanished, and there he was: a helpless, flailing, confused newborn, completely unable to manage any of what I needed him to do. I tried to help him, but that somehow just made things worse. Eventually, tears streaming down my still exhausted face, my wife called the nurse to come in and help us.

The midwife took charge, un-swaddling our one-hour-old baby with the seasoned skill of someone experienced with newborns (as my wife and I looked on with sheer wonder), opening the top of my hospital gown, and plopping him belly down on my chest, “pancake style.” Before I really knew what was happening, he somehow lifted his tiny newborn head and began to root around in this primal, instinctual way. I felt proud and overwhelmed with emotion I couldn’t place as he found his way to my right nipple, and began to happily nurse for the first time. “Wow!” I thought, “this breastfeeding thing is going to be easy!”

I couldn’t have been more wrong.

That first feeding was the last time my kid would latch on without professional assistance for three days, which, in the early days of motherhood, last forever. The next morning he and I woke up and we tried the same way, it seemed like everything was going wrong. The instinctual magic of of the night before had vanished, and there he was: a helpless, flailing, confused newborn, completely unable to manage any of what I needed him to do. I tried to help him, but that somehow just made things worse. Eventually, tears streaming down my still exhausted face, my wife called the nurse to come in and help us.

The nurse was friendly and chipper, something I would grow accustomed to, and assured me that this was no big deal and she was qualified to help. After asking permission to touch my breast, she attempted to put baby and boob together. She had no more luck than I did. And though she was better at hiding her frustration than I was, after 10 minutes of trying, she called one of the hospital lactation consultants. Only the lactation consultant was able to nestle my son into a comfortable position and get my nipple into his mouth. She was kind and understanding, and she was the first person to name the problem we were having: according to what she saw, my kid had a “disorganized suck.”

I needed help, and getting it was both humbling and humiliating. Rather than breastfeeding being the instinctual miracle I’d long thought it would be, it was something I needed constant assistance with.

What that meant was, while he had all of the instincts a new baby needs to successfully breastfeed, he was having trouble putting those tools together. So, he knew that he definitely wanted my nipple, and he knew that he needed to suck. And there was no physiological problem that should make that difficult for us. The issue was that once he got what he wanted, which was my boob, rather than latching on, he would suck contentedly on his own lower lip, and once he was doing that it was hard to get him to open his mouth at all, let alone to pop a boob in there. I needed help, and getting it was both humbling and humiliating. Rather than breastfeeding being the instinctual miracle I’d long thought it would be, it was something I needed constant assistance with.

For nearly three whole days, our pattern was the same every time. I would try to nurse him, become frustrated and flustered, call the nurse, and then the nurse would call in a lactation consultant. We were extremely lucky to be in a very breastfeeding-friendly hospital, with lactation consultants almost always available to us. And slowly, I began to learn little things that made the process slightly easier. It was best to call before I was reduced to shaking and tears, for example, and my son would never ever nurse in the “football hold.” Yet day after day, an army of other women — women whom I did not know — entered my hospital room, took my breasts in their hands, and helped me attach my child to the nipple. I felt like a failure, certain that as soon as we went home, he’d never latch again. I was scared and helpless and confused. Wasn’t this supposed to be natural? Why had I thought it would be easy? What the hell was wrong with me? And though oodles and oodles of people assured me that nothing at all was wrong with me, they couldn’t penetrate my self doubt.

Then, on the third day, amid pressure from a pediatrician to start supplementing with formula, my milk came in. As soon as it came in, there was a ton of it. And then, for the very first time, that morning I nursed my baby without having to call for help. “I’m doing it!” I said to my wife, staring excitedly at the 8-pound bundle in my arms. When the nurse came in to check on us, I told her proudly that I had already fed the baby. The next time I nursed him, I needed help again, but at least I knew it was possible.

We had a rough start to breastfeeding, but for me and my kid, it was well worth it. He’s creeping up on his first birthday now, and he still nurses like a champ. In fact, some days he nurses more than I’d like. I thought breastfeeding would be simple and easy, and now it kind of is, but in order to get there we needed perseverance, patience, and a ton of help.

More Like This
New Report Shows 80% Of Pregnancy-Related Deaths Are Preventable
What Is RSV?
Experts Explain Whether It’s Safe For Your Baby To Sleep On Your Chest
The Difference Between The PICU & The NICU