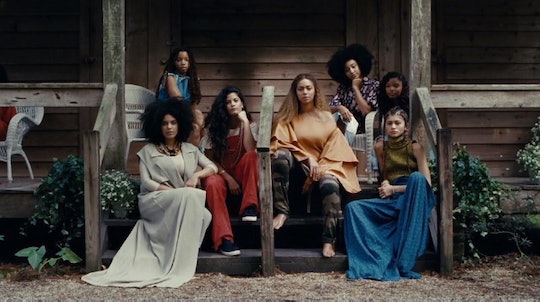 You've been waiting on Lemonade, haven't you, buzzing Beyhive? The wait is up, Lemonade debuted on HBO, and not a soul was disappointed. Lemonade turned out to be not a documentary, but another stunning visual album. With heavy background scenes shot in New Orleans, nobody was sure what to expect. What the masses received was a solid declaration from Beyoncé, complete with a Lemonade celebrity cameos, including Zendaya, Amandala Stenberg, Quvenzhané Wallis, and more.

Though she may not be the pop star you immediately think of when you hear the word "squad," she's certainly inching her way up that list with the girl gang she showed off in Lemonade. It's no shock that any one of these incredible women would say yes to Beyoncé when it came to participating in her latest artistic triumph. I mean, would anybody say no to Queen Bey? So far, I've counted ten lucky ladies (and one very, very lucky man) that made their celebrity cameos in Lemonade on Saturday night. And I'm going to spend the next hour re-watching, to keep my eyes peeled for any cameos I may have missed. Because Lemonade is only available for one day only, and you'd better believe it's going on repeat.