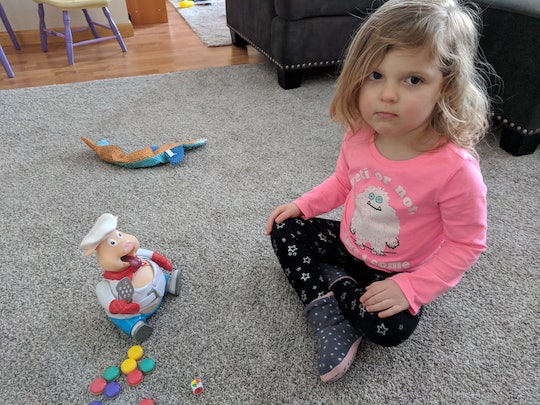 Let My Toddler Tell You *Exactly* How She Feels

I have to stop thinking of my daughter as this little baby. I even have to stop thinking about her as a toddler sometimes because she’s totally and completely, well, not. Her language has been exploding in the last few months and she’s perfected this hand-on-the-hip thing, strutting around and cocking her head to the side when something displeases her, which is 75 percent of the time. Yes, my toddler has been telling me lately exactly how she feels and her moods are nothing short of hilarious.

One of my parenting tactics — on the days where I can muster the energy for them — is to help my daughter talk about her feelings versus me just reacting to her behavior. Depending on how the day is going, there can be some level of success with this that I’m proud of. It’s not easy remaining calm and being the one in control, especially when tantrums and short tempers are involved. For instance, when she’s hollering at me that she wants to put on her own shoes, but holy lord we’re late and I just can’t anymore, I try to remember to stop and take a breath before asking her, “I know you’re feeling frustrated because you want to do it yourself. Can I help you with that, or would you like to put your shoes on in the car when we get to the store?”

Once in the car we may talk a little about feelings, like when we get mad or frustrated, and how we can deal with them. As I kid, my own feelings about certain things weren’t considered, and I don’t want that for my daughter. I want her to be able to express herself and recognize what’s going on in her body and mind. In other words, I want her to be more in tune with herself than I was.

We’ve tried to instill in our daughter that our feelings are OK.

It’s going quite well. Maybe too well sometimes. Because not only do we talk about moods and how we’re feeling, but also what’s going on in general.

She’s in this stage right now where she’s all about announcing anything physically or emotionally happening with her.

“I tooted!” she’ll declare happily, never mind we’re in an elevator with a man in a business suit.

“My butt hurts!” she’ll shriek in the grocery cart while we pass a crowd of women.

“Who tooted?” she’ll ask loudly in the library.

Instead of lashing out or throwing a toy when she’s mad, her dad and I have taught her that it’s OK to stomp her foot and tell us she’s mad when she’s in the moment. When she catches me crying, I talk about it with her instead of smiling and pretending nothing is wrong.

“I’m crying because I’m sad,” I’ll tell her. She’s slowly learning how to have empathy for people and how she can help make them feel better.

I love how she can stomp her little size-eight foot, barely making a sound on the wood floor with her socks on, and tell me she’s FUSTERATED!

We’ve tried to instill in our daughter that our feelings are OK. We can own them, and feel them, but it’s how we react to them that is either acceptable or not. It’s good to notice when we have air in our bellies. It’s good to notice a rumble and if we have to pass gas or use the bathroom. It’s totally cool to share that your butt hurts with Mom and Dad, but maybe not to the woman behind us in the check out counter, OK, honey?

The thing is, the advice I’m constantly giving her — about sharing her feelings and naming them, and about what’s going on inside her body — I could learn to be better about myself. Because don’t we live in a society where things are covered up, downplayed, or swept aside?

Girls are taught from an early age that it’s not polite to pass gas. But boys are encouraged to let them rip, because it’s funny and because boys are boys, right? Girls can cry about things, while boys need to man up. It’s OK for a boy to throw things and be aggressive, but a girl needs to learn manners. And these are totally blanket statements — in general, especially in our generation, a lot of these were things ingrained in us as kids. I’m seeing now in my friends’ kids, these stereotypes being turned upside down. And it’s a wonderful, welcoming thing.

I’m trying to unlearn these things myself.

The truth is, I love my daughter’s honesty. I love how she tells me exactly how she’s feeling. I love how she can stomp her little size-eight foot, barely making a sound on the wood floor with her socks on, and tell me she’s FUSTERATED! I love how she announces as she’s walking into the bathroom that she has to poop and I love how she’ll force me to explain what an anus is because she noticed a weird thing on the dog’s butt just now.

Because isn’t 99 percent of parenting answering digestive questions and showing them how to regulate their emotions?

When it comes down to it, we could all use a little more toddler logic.