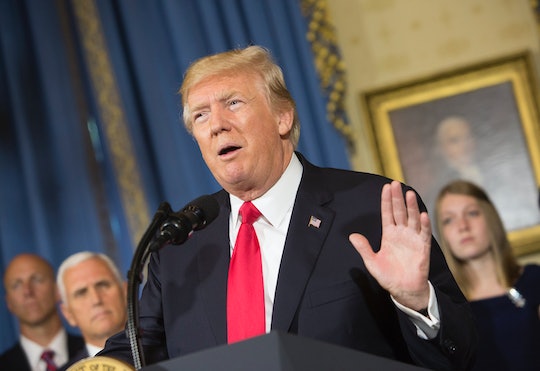 Despite numerous setbacks, Republican leaders are planning to move ahead with a vote to open discussion on their health care bill in the Senate. And on Monday, President Donald Trump put more pressure on undecided lawmakers by gathering families that had been affected by the Affordable Care Act, and giving a speech about the need to replace the law. Let's fact-check everything Trump said about families in his health care speech, because the changes for which he's advocating could have a huge effect on families across the nation.

It's still unclear what piece of legislation the Senate will vote to debate on Tuesday. As Republican Sen. Susan Collins, from Maine, said on Face the Nation Sunday,

We don’t know if we will be voting on the House bill, a second version of the Senate bill or a new version. I don’t think it is a good approach to replacing legislation.

But that didn't stop Trump from exhorting lawmakers to open debate. He spoke, on Monday, in front of a crowd of families who had been negatively impacted by Obamacare. He told their personal stories of hardship, but also made some big claims about what a new health care bill would do for them. And not all of his claims were necessarily true. So let's get into some fact-checking, shall we?

Trump opened up his speech by stating, "For the past 17 years, Obamacare has wreaked havoc on the lives of innocent, hardworking Americans."

This is not true. Obamacare became law in 2010. (It seems likely that Trump meant to say seven years.) And in terms of "wreaking havoc," while some families, like the ones Trump gathered on Monday, have indeed struggled with higher premiums, many others have gotten access to more affordable care and expanded coverage, coverage that they could lose if a new Senate health care bill passes. The Congressional Budget Office predicted that the most recent Senate plan could leave up to 27 million more people uninsured by 2020.

Trump introduced a family with a son who suffers from spina bifida. He told of how they struggled under Obamacare because they worried that their doctors and hospitals would move out of network, calling President Barack Obama's former promise that "if they like their doctor, they can keep their doctor" "more Obamacare lies."

Trump was telling the truth about this misleading claim from Obama, which was later rated Politifact's "Lie of the Year."

Trump repeated the assertion that the Senate bill "protects coverage for pre-existing conditions," but multiple outlets have reported that such a claim is misleading. As The Atlantic put it,

The Republican plan may not allow insurers to discriminate against a pre-existing condition through the front door, but they’ve created a backdoor way in.

An important part of the Republican plan involves making it easier for states to waive the Obamacare requirement that insurance plans provide "Essential Health Benefits." If insurance companies can offer cheaper plans without many benefits, many healthy people will likely go for those, leaving people with costlier pre-existing conditions in their own pool. And those pools could end up becoming prohibitively expensive, effectively blocking out people with pre-existing conditions anyway.

Talking about the families behind him, Trump said, "Obamacare's lies have caused this, and throughout the whole country, families like this, nothing but pain."

But in the years since Obamacare became law, more than 20 million additional people have gained health insurance. And a Consumer Reports analysis found that the rate of medical bankruptcies has greatly declined since the law went into effect. Over the last few months, many people have come forward with stories of how Obamacare saved their lives.

The families behind Trump during his speech have suffered greatly. But it seems likely that many more could suffer if a bill like the one that passed in the House of Representatives moves forward in the Senate.

More Like This
Jennifer Lopez Says Blending Families With Ben Affleck Has Been An “Emotional Transition”
Sally Field Is The Ultimate Cool Mom Who Once Tried To Set Her Son Up With An Olympian
10 Great Podcasts That Will Keep Your Kids Entertained On Your Next Family Road Trip
Marie Kondo Gives Up Tidying Post-Kids, Sparking Joy For Moms Everywhere
What Parents Are Talking About — Delivered Straight To Your Inbox