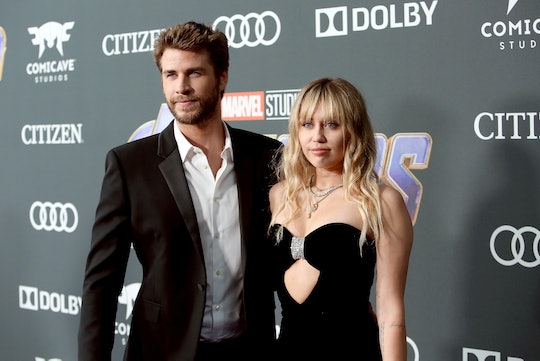 Liam Hemsworth Did The Most Unbelievably Sweet Thing For Miley Cyrus

Everyone wants their significant other to be their biggest fan. For some lucky couples, that's the case. Take Miley Cyrus and Liam Hemsworth, for example. There's no denying the pair, who tied the knot in December according to Us Weekly, are in love. Hemsworth serenaded Cyrus with "Party in the USA" before she took the stage at Beale Street Music Festival, and it's the cutest thing you'll see all day.

The Isn't It Romantic star posted an Instagram Story on Saturday of himself singing the pop song to his wife while they made their way toward a private plane waiting for them nearby. In the clip, Hemsworth could be heard shouting, "Hey Miley! Miley, hey, Miley!" while spinning in circles and strolling on the tarmac. He then sang his own rendition of the popular 2009 song. Cyrus could be seen smiling at her husband before pulling out her own phone to record his adorable performance. She didn't say anything, or sing along, however. The couple appeared to be joined by an entourage, though the video focused on just the two of them. In the end, Hemsworth jogged toward Cyrus, and the pair giggled in delight.

Later, Cyrus performed at the festival in Nashville, Tennessee. Video, obtained by TMZ, showed the "Malibu" singer shouting out Britney Spears while singing "Party in the USA," which references the pop star. Spears recently checked out of a mental health facility, as noted by The Daily Caller.

"Free Britney!" Cyrus yelled out to the crowd in the TMZ video.

Hemsworth wasn't visible during Cyrus' performance, but his Instagram Story post suggests he was there to support the singer. The couple often attends events and engagements together. They recently attended the Avengers: Endgame premiere side-by-side, wearing matching outfits according to Refinery29. Cyrus was photographed at the event wearing a black gown with a sweetheart silhouette and cutout detailing, while Hemsworth kept it simple in a black suit with a white shirt.

The couple tied the knot in a private ceremony at their home in Nashville in December, according to Vanity Fair. Family and friends were in attendance. Cyrus wore a cream silk gown to exchange her vows with Hemsworth. In a statement to Vanity Fair about the wedding, and dress, she explained that she decided to wear a traditional gown "because I felt like it." She noted that the decision "doesn't make me become some instantly 'polite hetero lady.'" She also spoke on her relationship with Hemsworth, calling it "special."

"My relationship is very special to me, it is my home. I feel less misplaced when we are in the same room, no matter where that is, but just because something changes in my relationship doesn't mean something has to drastically change in my individuality," Cyrus wrote. "What Liam and I went through together changed us. I'm not sure without losing Malibu, we would have been ready to take this step or even gotten married, who can say? But the timing felt right and I go with my heart."

Before the wedding, Cyrus and Hemsworth's home in Malibu, California, burned down in a wildfire that destroyed many houses in the area, The Hollywood Reporter reported. The couple spoke openly about it, even sharing photos of the wreckage on social media.

Here's hoping their future together is free of further tragedies and full of love and laughs.