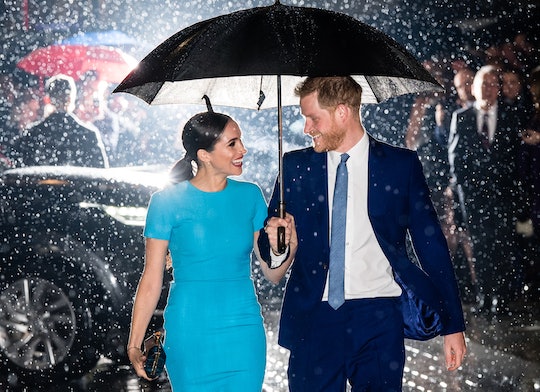 The Duke and Duchess of Sussex are heading to Lifetime. Well, sort of... A new Lifetime movie about Meghan Markle and Prince Harry's big royal exit earlier this year is officially in the works. The story of an American actress marrying a British prince and living happily every after was one story, but that same couple retreating from royal life and choosing a different path? I smell a winner.

Lifetime announced on Friday that Harry & Meghan: Escaping The Palace is in development. "The movie details the struggles of the new parents and unique challenges of being part of the royal family, which ultimately led Harry and Meghan to give up their royal ties to forge a new life on their own terms," the synopsis for the upcoming movie reads.

These "struggles" include the birth of their 1-year-old son Archie as well as their announcement in January that they would be stepping back from their senior royal roles and moving to North America.

Harry & Meghan: Escaping The Palace will actually be the third Lifetime movie to cover the story of Markle and Prince Harry. The first being Harry & Meghan: A Royal Romance and the second called Harry & Meghan: Becoming Royal, which followed their lives inside the palace.

No cast announcements have been made yet, nor any release date, but obviously we will all be watching because the thought of a behind-the-scenes look, even though it's fictional, sounds too amazing to pass up.

So here's a recap of what fans might expect to see from the new Lifetime movie if it follows real life: The couple welcomed their baby boy in May and made some choices to protect his privacy, including a decision to avoid the photo call outside the hospital after his birth. They went on to enjoy an amazing royal visit to Africa that was covered in Harry & Meghan: An African Journey, where they discussed their difficulties with the British tabloids and hinted that changes might be made.

From there, Markle and Prince Harry took some time away from the public eye around Christmas and came back to announce a decision had been made — they would be stepping back from the public eye, moving from the United Kingdom to Vancouver Island, and then Los Angeles, California.

If this hadn't happened in real life, I would think it was the premise for a Lifetime movie. So it looks like the network should have a pretty easy time of it with this one.