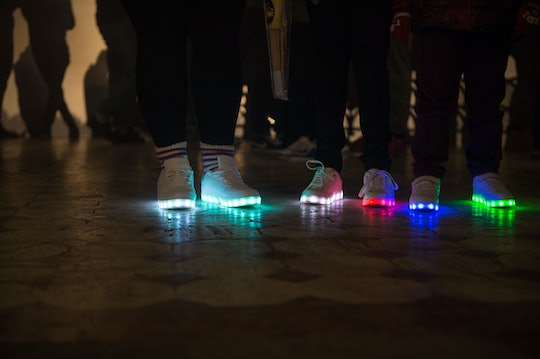 Every little kid remembers the thrill of seeing their shoes light up when they run, skip, and jump. It's a childhood rite of passage to own a pair of light-up shoes (LA Gear forever), and new versions are popular with preteens as well. But when your kids outgrow them, light-up shoes can't just be tossed in the garbage.

When I was a kid, I begged my mom to buy me a pair of light-up shoes. She resisted the idea at first, but eventually caved and bought my sister and I each a pair of white LA Lights sandals complete with hefty velcro straps across the top and bright pink lights in the base that lit up with every step. We were so cool. Little did my mom know back then, those coveted light-up shoes actually contained mercury.

The metal used within the LA Lights shoes to operate the switches that activated the lights based on movement was made of toxic mercury, according to a report by shoe manufacturer Hoverkicks. Yes, back in the '90s, we walked around with toxic mercury lurking beneath the soles of our feet — and some kids who wear light-up shoes today still do.

In 1996, the Environmental Protection Agency (EPA) put regulations in place to prohibit the use of most mercury-containing batteries, making mercury-free alkaline batteries the national standard. The exception however are the button cell batteries used in many toys, electronics, and still today in some light-up shoes. The EPA reported that these small, coin-shaped batteries do not pose health risks since the chances of mercury leaking from them are small, but they can pollute landfills when not properly disposed of.

Although certain brands still use button batteries within their light-up shoes, many current light-up shoes now use light-emitting diodes (LED) instead of button cell batteries in order to avoid any mercury exposure. Some light-up shoes may also contain rechargeable Ni-cad batteries, which have been reported to cause fires or burns. In 2018, a class action lawsuit was even filed against Skechers after reports of light-up shoes causing foot burns surfaced. Another type of battery — lithium ion — was also in question back in 2016 due to risk of explosion and fire.

Regardless of the type of battery your child's beloved light-up shoes contains, because they contain batteries at all, they are considered by the EPA to be Household Hazardous Waste (HHW). The EPA defines HHW as "household products that can catch fire, react, or explode under certain circumstances, or that are corrosive or toxic" and recommends special care when disposing of these products.

Because of the potential fire-hazard risks they may pose, the batteries in your child's light-up shoes — and any battery for that matter — should be properly disposed of. Proper disposal of light-up shoes will also help prevent the chemicals within the battery inside the shoes from seeping into the ground when they wind up in a landfill through your regular garbage disposal route.

The EPA's website recommends checking your state and local guidelines for HHW disposal to determine where to take your HHW — light-up shoes included — to get rid of them. Many areas have designated HHW drop-off sites with specific days for waste disposal. Newer LED light-up shoes may also fall under the category of electronic waste (e-waste), though not all areas have regulations in place for e-waste disposal, per the EPA.

My usual options when my kids outgrow their shoes are donate or trash, but learning about their light-up shoes' impact on the environment has me re-thinking my disposal process. I like to pass them on to another family whose children could wear them if they're in decent shape, but if my kids have been particularly hard on their shoes, I begrudgingly toss them into the trash. I hate to be wasteful, but sometimes there is just no salvaging their beat up sneakers.

In the case of their crazy-colored light-up shoes, from now on if I can't donate them to a family in need, I will be sure to find a hazardous or e-waste drop-off to ensure they don't wind up polluting a landfill.