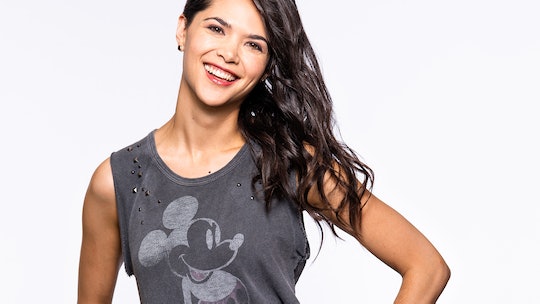 After three phenomenally groundbreaking seasons on the Disney Channel, Andi Mack has officially come to an end. The coming-of-age series launched many firsts for the children's network. Not only did the show center around an Asian American family, it also made history by featuring an openly gay character. Now with the last seven episodes debuting on Jun. 21, fans nervously anticipate the satisfying conclusion they've been yearning for since the series began in 2017. Luckily, star Lilan Bowden is here to prepare you for the final episodes of Andi Mack Season 3.

In a phone interview with Romper, Bowden, who has played Rebecca "Bex" Mack since the show's pilot episode, shares what's to come in the "bittersweet" Season 3 ending.

"I hope that it’s just as gratifying for the fans as it has been to shoot it," Bowden says. "I think that for the past three seasons, we’ve been torturing our fans with a lot of these storylines — like with Andi and Jonah, with Cyrus, and with Bex and Bowie. I think that in one way or another, a lot of these storylines are revisited and people will feel happy about."

Bowden also teased Bex's storyline in Season 3 of Andi Mack, and it looks like there's cause for celebration.

"I feel like we get to see some real happiness from Bex after a lot of seasons of really struggling," Bowden says. "So I was excited to shoot it and I’m really excited for people to see Bex have a couple of wins… but not without a lot of heartbreak, too."

Andi Mack is known for introducing "controversial" storylines to their audience — like coming out and anxiety — but the general response has been overwhelmingly positive. The series has opened a number conversations for a spectrum of people, and Bowden is honored to be part of a Disney project that made a new generation of kids feel seen.

"I really feel like Andi Mack has done such a good job of letting kids know that it’s really okay to be themselves," Bowden says. "I really hope that we remind people that hardships mean you can be okay with yourself, grow up, and be okay with your circumstances. I hope these last episodes give fans the feeling of acceptance and love."

As an Asian American actress herself, Bowden deeply understands the importance of representation.

"I would have loved for an Andi Mack to be on the air. I can’t even imagine what that would have done for me to see myself onscreen. For years, I had just a small imagination of what I saw onscreen and what I could do," Bowden explains, detailing that she only saw herself as the "best friend of somebody who was the lead."

"The fact that I could have booked a show where I got to be the forefront is everything," Bowden continues. "And I hope that this becomes a pioneer show, not just for storylines, but for its representation, where it’s reinforcing that yes, Asian Americans can be the lead. We can carry a show."

Bowden says that there have been notable changes in Hollywood with the success of series and movies like Andi Mack, Crazy Rich Asians and Netflix's Always Be My Maybe. However, there is still work to be done.

"We’re so excited by these things, but at the same time, there’s still only what? Maybe three shows on air that have an Asian American family out of how many? And Andi Mack is ending soon, so we gotta get some new blood here," Bowden exclaims.

That said, Bowden encourages fellow Asian American audiences and creators to continue rallying behind their own projects.

"I think that when we get a little spark, a little taste of what it’s like to be represented onscreen, it makes the community wild," Bowden says. "We’ve been hungry for this kind of representation for a really long time and I think that the more I see us, I feel like we have more hope now. We have faith instilled in us and we’ve got a drive to keep working and keep going and keep bringing these storylines to television and film."

Now, Bowden is spearheading an Asian American project of her own. Following the end of Andi Mack, the actress is back at UCB Comedy and set to appear in Asian AF, College Humor, and Season 2 of YouTube's Impulse. She is also directing her first short film, Becoming Eddie, an all-Asian American production.

"This is a way for us to take the power into our hands again and creating even more media for Asian Americans," Bowden says. "This is a story that features an Asian-American family once again, so it feels very empowering."