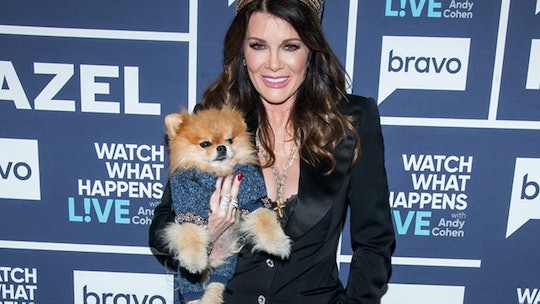 OK, Everyone Needs To Read Lisa Vanderpump’s Tweets About ‘RHOBH’

This is truly the end of an era. Following the events of #Puppygate and the taping of the Season 9 reunion without Lisa Vanderpump, it has been confirmed that the Bravo star is leaving The Real Housewives of Beverly Hills. And while the tea of LVP's departure has been brewing for months, fans have been beside themselves with the news. But how does the reality star feel about her big exit? Well, Lisa Vanderpump's tweets about RHOBH might be indicative of how she's feeling right now.

Previously speaking with DailyMailTV, Lisa hinted that she wouldn't return for RHOBH Season 10, citing her fellow cast members as the reason.

"I think they've made it pretty impossible for me to go back frankly," Lisa said.

Then on Jun. 7, Extra interviewed Lisa at the "Real to Real: Portrayals and Perceptions of LGBTs in Hollywood" event, where the Bravo star confirmed her withdrawal from RHOBH for good.

“The last year was a very negative year for me. I feel like we’re moving forward. They have had their resolution," Lisa revealed to the publication. "I just had a horrible time with the show and the women. It was a very sad time in my life and it wasn’t made any better. I just decided to walk away.”

Since the news of LVP's departure from the Bravo series broke the internet, fans have been reeling. But Lisa has remained relatively quiet about the situation. Her Twitter feed is currently filled with tweets supporting LA Pride and promotions for various events the reality star is set to appear in, such as Family Feud and her Vanderpump Cocktail Garden event at Caesars Palace.

Nonetheless, Lisa did manage to sprinkle a few RHOBH-related retweets and replies that prove the reality star has something to say about her RHOBH castmates.

On the day of the reunion taping, Lisa retweeted a fan's response to the Bravo's star's absence.

"What does it say about 5 women plotting and attacking 1 emotionally fragile women on TV and SM for 10 months? Smart people walk away from that," the fan wrote. "It's time they rode their own coat tails and get off LVPs. What will they talk about w/out story lines? Toe nails?"

Later, Lisa retweeted a fan's response to fellow RHOBH star, Kyle Richards. When Kyle tweeted about the reunion shoot, the fan wrote, "So all along you kept saying #keepwatching as if some major bomb would come out about @LisaVanderpump. Where’s the bomb Kyle? Ummm yep nothing because there was nothing there. #goodbyeKYLE"

Then on Jun. 10, Lisa retweeted a fan's take on Lisa Rinna, which labeled the RHOBH star as a "sociopath."

But the drama doesn't stop there. Lisa is known for interacting with her fans on Twitter, so it was only natural that she responded to tweets in regards to her exit.

When one fan called for the RHOBH crew to publicly apologize for how they handled LVP in Season 9, Lisa said, "Now that would be a beautiful thing."

Meanwhile, another fan reminded Lisa that she could now unfollow the RHOBH cast, to which Lisa responded, "Excellent idea lol... Will get to it ASAP." Hilarious.

That being said, Lisa's Twitter feed isn't all bad when it comes to RHOBH. She retweeted a Slice video that celebrated Lisa's Bravo journey thus far. And TBH, it's adorable.

So will RHOBH be the same without LVP? Probably not. But this definitely won't be the last you see the reality star, especially when Vanderpump Rules still lives on.

The Real Housewives of Beverly Hills airs Tuesdays on Bravo.