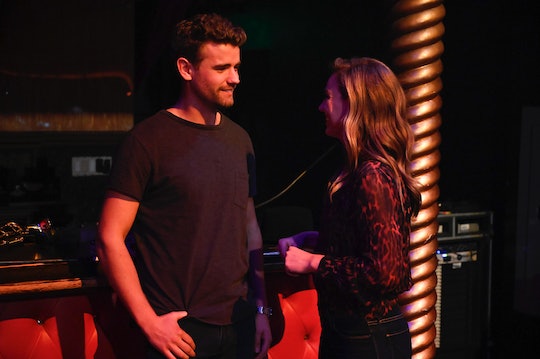 Luke S. Quit 'The Bachelorette' Before Hannah Got The Chance To Send Him Home

After Luke P. pulled the love card one week, graduated to jealous boyfriend the next, and instigated a fight with Luke S. the following week, it's safe to say that he is a sure thing for The Bachelorette final four. Unfortunately for Luke S., that meant a tumultuous final cocktail party and Luke S. self eliminated on The Bachelorette. It all started when Luke P. got a little too aggressive during the rugby group date. Pair that with the fact that a lot of the guys already felt animosity toward Luke P. because of his actions with Hannah and it was only a matter of time before someone had to call him out.

This time, it was Luke S. who just couldn't sit by after Luke P. barreled through the rugby date to impress Hannah and earn a group date rose. Luke S. saw Luke P.'s behavior as so aggressive that he almost confronted him about it afterward. But when he expressed his concerns about Luke P. to Hannah at the cocktail party, it kind of backfired.

Instead of finally sending Luke P. home after another one of his antics, Hannah kept him around. Since it seems like Luke P. can do no wrong at this point, Luke S. sent himself home. And if Luke P. is going to continue on a similar path of behavior, then it was probably best that Luke S. sent himself home now before things could escalate further between them.

Luke S. isn't the only contestant to have complaints about Luke P. Last week, the men sat around airing their grievances about Luke P.'s behavior with Hannah and at the cocktail party tonight, Mike and Luke P. got into it. Luke S. probably felt that it was best for himself to go home early before things could go from bad to worse with Luke P., but at this point Luke P.'s behavior is making everyone around him a ticking time bomb. He already acts like Hannah is his girlfriend and like he has never seen an episode of The Bachelorette before to know how the process works.

Naturally, the guys haven't loved the way Luke P. interrupts conversations to get time with Hannah himself or the way his aggression comes out whenever she isn't around. While Luke S. definitely had potential with Hannah on The Bachelorette this season, it was best for him that he go home early, before he could fall for Hannah too hard while dealing with Luke P.'s antics.

Rugby is a naturally brutal sport. Maybe Luke P.'s aggression on the field was warranted and Luke S. didn't need to take it personally. At this point, however, Luke P. had already rubbed so many of the other men the wrong way. Some of them likely saw his on-field aggression as something more that went beyond the game. Luke S. tried to hit back and later, Hannah chose to be diplomatic rather than act as a referee between Luke P. and Luke S.

To Hannah's credit, it's not her responsibility to settle grievances between the men. Earlier in the episode, she already had to deal with a he said/he said after the rugby game. So instead of reprimanding one of them for their behavior at the cocktail party, she saw things the way Luke P. wanted her to see them.

And if Luke S. felt that he wouldn't be able to stick it out to get to know her better with Luke P. around, then leaving early was the best move he could have made. Given the way the other men have continued to react to Luke P., however, this definitely isn't the last we have seen of the other guys calling him out.