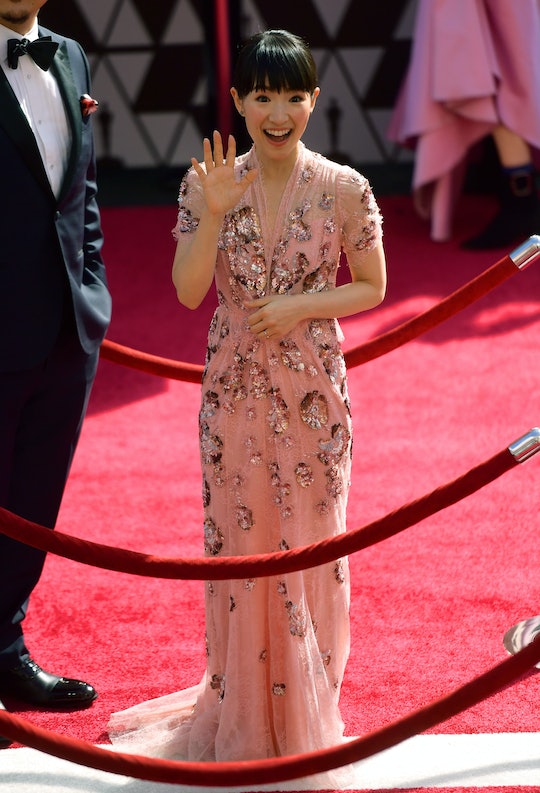 I'm not lying when I say that Marie Kondo, and her binge-worthy Netflix show, Tidying Up With Marie Kondo, have saved my sanity this winter. I've caught the decluttering bug in a serious way. Every time I drop off a bag full of items at Goodwill, which is weekly at this point, I feel mentally lighter, almost giddy. Yet, the one thing I was putting off implementing was Kondo's style of folding clothes. I wasn't sure if I could hack it, honestly. But after seeing Marie Kondo folding clothes with her kids, not only was my heart complete mush, but I no longer had an excuse — if a 3-year-old can do it, so can I!

For those unfamiliar with Marie Kondo, let me gush for a minute. Kondo is a tidying expert, bestselling author and now the star of a hit Netflix show that's all about teaching stressed out Americans how to say goodbye to clutter. On the show, Kondo explains her trademark KonMari method of cleaning, which encourages tidying by category instead of location (yes, it's breakthrough!), with the first category being clothes. Here Kondo has two game-changing tips — discard items that no longer "spark joy," and then organize your drawers by immaculately folding your clothes.

Well, her two daughters, Satsuki and Miko, are making that folding style look easy — and absolutely adorable — in the new Instagram video that Kondo posted on her Instagram feed on Tuesday.

In the video, the sweet little toddlers (ages 3 and 2, according to Good Housekeeping) are seen giggling and folding clothes for what looks like an upcoming trip. One of the girls masterfully folds her pants into a vertical pod (Kondo's signature style) and then jumps up triumphantly, seemingly saying, "See, anyone can do it!" It's ridiculously cute and also oddly inspiring.

I am now confident that I can fold laundry the Kondo way, and not only that, I'm getting my 4-year-old and 2-year-old in on the action. In fact, I might be starting them a little on the late side. Kondo recommends getting kids involved in tidying as soon as they walk, according to Good Housekeeping. And it seems Kondo's daughters are indeed following in their mother's organizing footsteps, if their suitcase in Tuesday's Instagram video is any indication. It's total packing goals.

Kondo has posted suitcase pictures on her Instagram in the past, — like this one, in which captioned: "When you have everything neat and organized in the drawer already, it’s very easy to pack — you just take your folded clothes out of the drawer, and place it in the suitcase. It’s that simple!" I guess that's all the more reason to start folding clothes the Kondo way.

If you're like me, you just can't get enough of Kondo and her precious family. So now the only question is if Tidying Up With Marie Kondo is going to get a second season on Netflix? It seems the answer is still unclear, but for all those out there becoming Kondo-lievers, let's sure hope so.