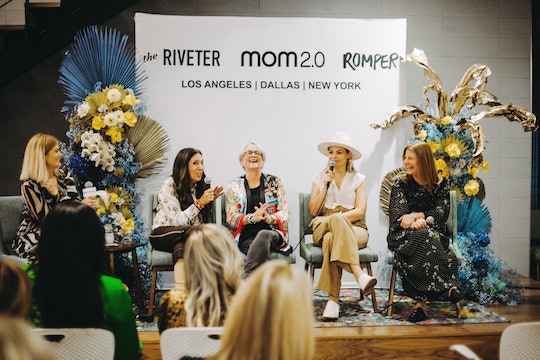 They Came To Hear About Influence. They Ended Up Talking About Mental Health.

The official theme of the night was "change the conversation," but as those in attendance, both on the stage and on the floor, dug into their lives, the focus undeniably landed on maternal mental health.

The second popup event from the Mom 2.0 x Romper x The Riveter partnership took place at The Riveter West L.A. on October 10 — fittingly, it was World Mental Health Day.

Mom 2.0, a community of bloggers, influencers, and creators centered on the motherhood experience, is a good bellwether for the parenting conversation, and it is no coincidence that the conversation became a forum on mental health and wellness — mommy bloggers of the 1.0 internet, along with their Instagram-savvy peers, are in no small way responsible for the changing the conversation around the stress new mothers face. "At every pop-up event this year we've seen women in the audience stand up and share their individual stories and knowledge with the audience and panelists," says Carrie Pacini, a co-founder of Mom 2.0. "It's not just a presentation, but a two-way dialogue."

Perinatal mood and anxiety disorders (PMADs) impact an estimated 20 to 25 percent of pregnant people and new parents, per the National Perinatal Association, and encompass depressive, anxious, and obsessive disorders, along with post-traumatic stress disorder, bipolar disorder, and psychosis, though the latter is relatively rare. In 2018, the American College of Obstetricians and Gynecologists changed their recommendations for a single postpartum checkup at six weeks, stating that parents need ongoing and improved care. Earlier this year, the FDA approved an intravenous drug designed to treat moderate to extreme postpartum depression, Zulresso; this occurred around the same time that Dr. Alexandra Sacks and Dr. Catherine Birndorf, two reproductive psychiatrists, published What No One Tells You: A Guide to Your Emotions from Pregnancy to Motherhood, a groundbreaking book for perinatal mental well-care.

Show me a cause that doesn't involve mental health.

The increasingly open discussion around postpartum depression, in particular, has been led by an army of women willing to share their experiences publicly, from Brooke Shields in the 1990s to bloggers like Mia Hemstad, who has blogged about her experience with PMADs, and piped up from the audience on October 10 to ask the panelists how to keep finding energy to devote to their causes. Hemstad said she had received emails from many other mothers thanking her for sharing her experience, and yet felt exhausted from the effort of getting her story out. "I got emotional just asking the question, which was not the plan, but I am so glad I spoke up because so many women came up to me to encourage me and validate the struggle I'm going through in holding space for my online community," Hemstad explains to Romper.

Speakers included Sharon Feldstein and Patsy Noah, celebrity mothers of Jonah Hill and Adam Levine, respectively, and founders of Your Mom Cares, a nonprofit devoted to kids' mental wellness. "Show me a cause that doesn't involve mental health," Feldstein told Romper on the night.

I'm still amazed at how people who you don't even know can connect with you so deeply when you all have a heart for the same kind of work.

They sat alongside Caitlin Crosby, who founded The Giving Keys, which provides job support for people transitioning out of homelessness, and Zoe Winkler Reinis, a co-founder of This Is About Humanity, providing humanitarian support to families on both sides of the U.S.-Mexico border. Reinis described children reporting PTSD symptoms in Tijuana shelters, and agreed that mental wellness underpins the issues she cares most deeply about. Romper moderated the panel, and companies like Pinkberry were there in support — in the form of tasty treats.

In the headline event, Jim Henson Co. president of TV Halle Stanford; photographer Bonnie Tsang; influencer Rachel Matos; author, social worker, and organ donation advocate Catherine Pearlman; and "10 Things To Tell You" podcast host Laura Tremaine sat with Mom 2.0 co-founder Laura Mayes to discuss the raw reality of drawing people to a movement, and continuing to push through personal obstacles — panelists had personally been affected by a range of challenges, from introversion and mood disorders to fibromyalgia and chronic pain.

"I'm still amazed at how people who you don't even know can connect with you so deeply when you all have a heart for the same kind of work," Hemstad said after the event.

"Connecting online is great, but connecting in-person? There's just no substitute for that."

The next Mom 2.0 x Romper x The Riveter popup will be in New York City on November 13. You can get tickets here.