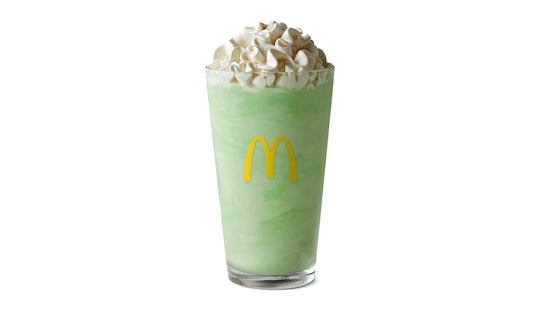 McDonald's Shamrock Shake Is Back Again, & People Have... Feelings

Once upon a more innocent time, the only beverage associated with St. Patrick's Day was green-tinted beer. In recent years, however, it's been another green-tinted drink that gets all the buzz whenever the Irish holiday comes back around on the calendar — except, unlike the beer, this one can't actually get you buzzed: the perennially popular McDonald's Shamrock Shake. That's right, everyone's favorite minty milkshake is back, as the company announced via Twitter on Thursday... although, if the wide range of reactions is any indication, it's not actually everyone's favorite.

As People reported, Shamrock Shakes first made an appearance at McDonald's in 1970; in the years since, the seasonal offering has gained a serious cult following. It's become so popular, in fact, that the Shamrock Shake probably crossed the line from cult fave to mainstream staple years ago at this point. Still more evidence that the Shamrock Shake is an icon: There are countless copycat recipes online, and even some myths regarding its alleged superpowers (the shake has been rumored to help boost milk production in nursing moms). There's even a dedicated Shamrock Shake finder in the McDonald's app.

Still, because they're only available for a limited time, fans tend to get a little bit... worked up about them (similar to the frenzy that heralds the return of the McRib). There are those who would prefer their Shamrock Shakes administered intravenously:

While other fans start getting excited about Shamrock Shakes while everybody else is still celebrating a different holiday:

Others, however, are more cautious in their excitement. Like, maybe they used to be big fans, but then...

On the other end of the spectrum, naturally, there's the anti-Shamrock Shake contingent. Possibly these people don't eat fast food in the first place (full disclosure: I've never had a Shamrock Shake, but that's mostly because the last time I consumed anything from McDonald's was in maybe 1988). Possibly they're not into mint-flavored desserts (full disclosure: also me), though I've been told the shake tastes more like its vanilla soft-serve base than the minty green Shamrock Shake syrup that gets mixed in). Whatever the case, there are most definitely Shamrock Shake haters out there, and they aren't shy about making their feelings on the frozen treat known:

(I mean, is everybody pretending?)

Because plenty of people obviously see no reason to bother keeping up the charade...

And absolutely will not spend any of their hard-earned money on one of those things:

Makes you wonder what sort of situation would involve a person being forced into unwillingly purchasing a Shamrock Shake, doesn't it?

Assuming you're in the pro-Shamrock Shake camp, you might also be wondering what's actually going into your body when you drink one. Unsurprisingly, it's not quite as good for you as most green beverages (besides that green beer): As Thrillist reported, a small Shamrock Shake has 460 calories, 13 grams of fat, 74 grams of carbs, and 10 grams of protein (huh!). It also has 150 milligrams of sodium and a whopping 55 milligrams of cholesterol.

So if you're not a fan, there's certainly no reason why you should try to talk yourself into liking these things; from a nutritional perspective, you're better off without them in your life. If you're one of the many diehard Shamrock Shake devotees out there, however, by all means go ahead and indulge. Life is short, and so is Shamrock Shake season (they'll be gone again after March 24!).

More Like This
10 Thanksgiving Desserts That Aren’t Pumpkin Pie
HelloFresh Is Releasing Spaghetti Meal Kits Inspired By Buddy The Elf
Store-Bought Meals Didn’t Ruin Our Holidays. They Made Them.
20 Holiday Gifts For Neighbors They’re Sure To Love