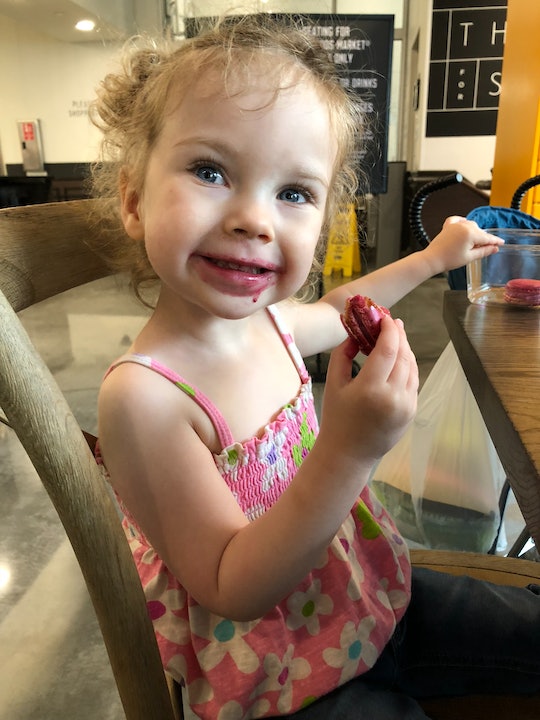 It's Friday and I am sitting down to dinner with my husband Dan and our 3-year-old daughter Claire. Like most nights, Claire's plate is piled high with the things she loves — brown rice pasta, steamed broccoli, a handful of blueberries. Dan and I laugh as she goes for the broccoli first. Even though we know the kid runs on produce — and she has the bathroom habits to show for all that fiber — it's not lost on us that her affection for such foods and our lack of mealtime battles is something to be appreciated.

Of course, part of her appetite could just be attributed to luck. I am the last person to believe my parental super powers are capable of moving mountains (or making a child love green beans). But I do think Claire's eating habits have something to do with my philosophy, which is one that has been deeply shaped by my history with food.

When I became pregnant with my daughter Claire, I was still chipping away at the remaining bits of a 15-year-long eating disorder. At the time, I was 30, and I was no longer in active recovery. But that's not to say that old tendencies didn't sometimes creep up — often when I least expected them. In the days before I found out I was pregnant, I had undergone a dental procedure that left me unable to eat solid food for the better part of a week. As my body responded to the lack of calories (e.g. a flatter stomach, thinner face), I found myself standing in the mirror and admiring the changes. My recovery voice told me to turn away; my eating disordered past asked for more.

But then I saw those two pink lines on a pregnancy test and it was as if they acted as the final strikethroughs on my ED habits. I marveled at what my body could do — I was growing a human! — and felt a deep respect for what it was able to accomplish, something I had never been able to do in the past.

Around the time that I was 20 weeks pregnant, we found out I had a single umbilical artery — a healthy umbilical cord has two arteries. The doctors assured me it wasn't a dire situation and that our baby girl would likely be born perfectly healthy. But it did mean that less nutrients would be reaching her. It meant she might be delivered early if my body could no longer give her the things she needed.

It was a wait-and-see situation, but I am not a wait-and-see mama. I started packing my meals with all the nutrients — baby kale smoothies with Omega-3 oils, yogurt bowls with fresh fruit and nuts, and leafy green salads with avocados — to ensure I was doing everything I could to give her what she needed. I didn't know if it would help or not, but I knew it wouldn't hurt.

I carried Claire two days past her due date. She weighed 7 pounds, 14 ounces — a perfectly healthy baby girl.

When Claire began to eat solids, I applied a lot of my knowledge about food and how we should treat it with more holistic regard (e.g. how it grows and how it works to nourish our bodies). If she didn't like something, I didn't force it. And as she grew older, I continued with a lot of that same methodology. Today, if she doesn't want to try something new, I ask her questions like, "What makes you think you won't like it?" I encourage her to take just one bite and tell her if she still doesn't like it, then she doesn't have to eat it. If she's on the fence about the funky smell or appearance of something, I try explaining to her where it came from. Recently, she didn't like the way a slice of mango looked ("Too slimy!"), so I explained to her that it was the same fruit that eventually turns into her beloved dried mango strips. That got her to take a bite — and then 15 more.

When I was navigating the recovery process for my eating disorder, I realized my approach to food had been black or white. There were good and bad foods (and I was good or bad for having eaten or not eaten them) — and that was the final word. Recovery meant opening my mind to the "what" and "why" behind food, and it's a tactic I've carried over into my food conversations with Claire. I hope that by doing so it helps to remove the pressure surrounding food — something that our culture is very good at applying — and it's a relationship she can continue to nourish in her own ways as she grows older.

That means that in our house, there are no off-limits foods (with the exceptions that trigger Claire's allergies). My rule has always been if she wants to try it, then let her try it. Now that she's older I can also have conversations with her about the way food makes her feel, which is a very important part of this equation. For example, more recently she ate cheesy pasta and complained about her belly (she has issues with dairy), so I used it as an opportunity to talk to her about how she can pay attention to icky feelings related to food and avoid them in the future.

It's an approach that Melainie Rogers, the owner of NYC-based eating disorder treatment center BALANCE, says is important in helping patients to understand that there are not "good" and "bad" foods. She tells me that kids should be coached on hunger and fullness, and validated when they say they are hungry.

"Foods are neutral — neither good nor bad," Rogers says via email, adding that parents should try saying, "The foods we are talking about help us to grow bigger, get stronger, run faster. They have special ingredients in them called vitamins and minerals. These special ingredients help us grow — we need them!"

Rogers says you can also say, "Some foods don't have vitamins and minerals — or not many. So they don't help us grow or run faster, but they still taste good and are fun to eat some of the time."

That's not to say that if Claire was a super picky eater, this would necessarily be quite as easy. You know, I don't want to profess to know what I would do if Claire had a different appetite for food, but I will say this: I think I would approach it in the same way I did from the beginning with Claire — with honesty about the "what" and "why" behind the food we're consuming. For instance, I don't hide spinach as I put it in her smoothie. I say, "Hey, here's the spinach, here's the banana, here's the almond milk, and then we blend it." That way, when Claire tastes the smoothie and realizes it's good, she knows that an often tough-to-eat vegetable was included in the mix.

With a picky eater, I would encourage them, like I have with Claire, to be hands-on in the kitchen and let them help with food preparation. I think that's a crucial part of the learning-about-food process.

"There is an enormous body of research that supports food education as a way to get kids to love eating fruits and vegetables, prevent childhood obesity, and most of all cultivate a healthy relationship with food," Dr. Michelle Davenport, co-founder of Raised Real, told me when we chatted about how to teach kids to eat healthy without body shaming. "It all begins with food, and the earlier we start, the better."

I don't deal with tantrums about food. That's not to say that I am judging parents who do. We all do the things that work best for our children and our lives (and claim our sanity in different ways). For me, that looks a lot like this: At the end of the day, I take stock of what Claire consumed, like I would for myself, and I think many other adults also do.

Did she drink enough water? Did she have too much fruit and not enough substance? Do we need to pack in some more greens tomorrow?

I really try to take a look at the whole picture as opposed to zeroing in on a singular dining experience and chalking it up to Claire's overall attitude about food. As a whole, she does a great job at eating what's on her plate, so, for me, it's not worth it to get into a war about an unfinished serving of rice.

And even when every-now-and-then food issues do pop up, I approach them with caution. Maybe I am treating it a little too much with kid gloves, but my history has made me pretty careful about the ways in which we discuss the consumption of food. If I ran into a situation where all Claire wanted was sweets, I think I would refer back to the conversation I had with her about the cheesy pasta. I would say something like, "Remember how yucky you felt after eating that cheesy pasta? Eating too much candy might do that, too. How about one piece and then we also have some blueberries?"

That's not to say that if she's giving me full on attitude that I don't resort to the usual parenting tactics (ahem ... bribery, ultimatums ... you get it). If she's snubbing an entire plate of food because playing with her toys sounds more appealing, then I've been known to say things like, "OK, well, if you can't put some food in your belly, then I really feel like you also can't have dessert after dinner."

But if her distaste for a particular meal appears genuine, then I try to keep in mind that she is a human — albeit a tiny one — who has likes and dislikes, too. You won't find me pushing for a clean plate or reducing the two of us to tears over uneaten eggs.

Instead, you'll most likely hear me saying things like, "Hey, babe, do you know why we need to eat food?" To which she will say, "Why?" And I will explain to her in one way or another that foods give us energy to run and play, and help our bodies to grow strong. I don't single out certain foods as more or less important because my recovery taught me that's not the case. All food serves a purpose, even if it is for the sheer enjoyment of a chocolate chip cookie.

What I want her to hear is my resounding "yes" to food and all the ways in which it serves our bodies. And even though I might grow to learn that my philosophy needs to bend and change — that's what parenting is about, right — I hope the core of what I'm saying to my daughter sticks with her forever. I hope the little girl who grins back at me as she pops blueberries like candy or joyfully licks the icing from a cookie knows that consuming food doesn't have to be a battle — with herself, her parents, or anyone else for that matter.